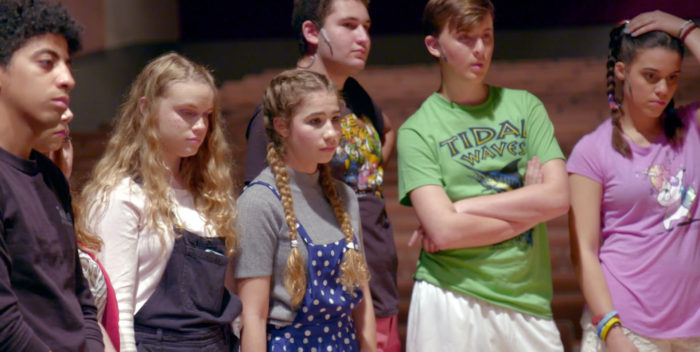 When we ran into Melody Herzfeld at the Tony Awards, she seemed stunned at the place history had taken her. This week at a special screening of “Song of Parkland,”  an HBO documentary directed by Amy Schatz, she had her Tony Award by her side, still stunned, and feeling guilty. She would have preferred a prize for merit, she said. Instead she was honored for her heroism in a tragedy, coolly ushering 65 students into a back storeroom closet for two hours as a gunman murdered 17 at the Marjory Stoneman Douglas High School in Parkland, Florida where she taught drama. At HBO, dozens of her former students attested to her epic qualities as a teacher. While she was not falsely modest, part of her charm is a self-effacing humor worthy of Joan Rivers. Then again, as she told us at the Tony’s, she was from these parts, from New Jersey.

While “Song of Parkland” does not shy away from the graphics—we do see iPhone footage of the massacre as well as students taken out of the building shielded by police, the purpose is not to dwell on the horror but rather to note the bravery of simply healing. As we know from the headlines in the aftermath, some students have taken the road of activism for sensible gun reform, advocating for background checks, and getting more young people to vote.  As student Alex Wind, said, “We’re trying to make activism cool again.”

This half hour film focuses on the continued work in theater, kids coming back to the show: students rehearse for a musical for children called “Yo, Vikings,” that has sustained them through song, community, and shared grief. In rehearsal, when they go slack, Herzfeld shouts, “Game of Thrones,” exhorting them to give greater voice. Song of Parkland asks, how does anyone survive such a dire moment? Featured are songs composed by Herzfeld’s students, seen as well put together, articulate high schoolers. As student Ashley Paseltiner reminded everyone, “We’re just teenagers.”