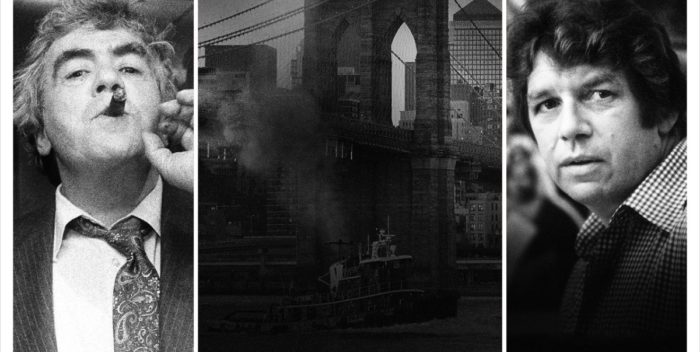 There aren’t any more Breslins or Hamills, exemplars of a masculine New York postwar street journalism. Now these superstars of newsroom culture star in a state of the art documentary, “Breslin and Hamill: Deadline Artists,” to air this week on HBO. At a star-studded premiere at the Time Warner Center with dinner at Porter House, they were celebrated in high style—Jimmy Breslin died in 2017, and a frail Pete Hamill could not attend– even as the world they brought to life feels like a near forgotten memory of a bygone era.

Beginning on the subway, with images of riders on their cellphones morphing back to riders in the mid-century reading their newspapers, large pages crowding air space, the film, a shared directorial effort of Jonathan Alter, John Block and Steve McCarthy, traces a city in flux. Says Hamill in voice over, You could smell the “salty perspiration” of working men returning from their labors. Because that’s what workingmen did. No one knew them better than Breslin and Hamill because that was their beat. As Breslin makes clear, There’s always something if you go into a poor neighborhood to chase a story. As reporters, they became big, but stayed on the side of the little guy.

They covered the salacious and the scandalous: Bernhard Goetz, a white subway rider who turned a gun on four black teens, “Son of Sam,” a serial killer of young women, the brutal rape of the Central Park jogger. Looking beyond the hate mongering of the likes of Donald Trump who asked for an immediate death sentence for five black teens who were picked up for the crime, inflaming race hatred in New York, these reporters sought truth beyond accepting quickie, convenient and clearly racist solutions. The Central Park teens served time and were later exonerated. The “subway vigilante” Goetz shot the teens in the back. Asks Breslin, how threatened could he have been?

Breslin championed Cibella Borges, a petite Latina rookie cop who was enticed to sit for some girlie pictures and was fired from the police work that she loved. He got her job back. Limning the big stories of that time—the JFK, RFK, MLK assassinations, 9/11– the film ennobles these newsmen, illuminating the poetry of their prose, as they lamented “the lost city of New York” (Hamill), and “Dies the victim; dies the city” (Breslin).

Hamill, it should be noted, went out with Jackie Kennedy and Shirley MacLaine, and so was himself fodder for the tabloids. In the ‘80’s I had the opportunity to ask him about dating these women. Being seen with Jackie, he said, was like going out with a fire engine. And Shirley, well, he hoped that she would not wake up one day and regret her new book, Out on a Limb, in which she embraced New Age spirituality. She did not, and went on to write a few more.

Munching on thick slabs of filet mignon and thicker chocolate cake was at least one contemporary of the subjects. the great Gay Talese, turning 87 on February 7th, dapper and with it, probably wondering when his documentary his coming ( he deserves one) as well as Phil Donahue (who doesn’t look much different than clips of his old show included in the film), Gail Collins, Richard Cohen, Katerina van den Heuvel, actor Bob Balaban and writer wife Lynn Balaban, musician David Amram, the aforementioned Borges, Ronnie Eldridge-– Mrs. Breslin– and many others joined the filmmakers, filling Porter House with the lively chatter of smart New Yorkers from a time when intelligence was a turn-on. Yes, thank heavens, for many it still is.