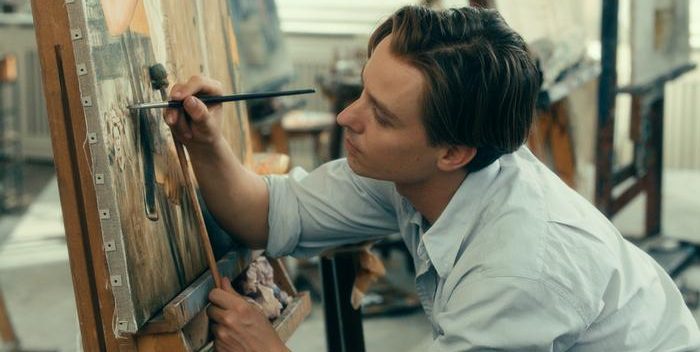 Editor’s note: For the Oscar foreign film category, we love “Roma,” “Cold War,” “Capernaum,” and “Shoplifters.” But “Never Look Away” is in a category all its own.

Germany’s Oscar entry, Florian Henckel von Donnersmarck’s “Never Look Away,” provides a glimpse into an artist’s life against the backdrop of the Nazi’s declining power in Europe.

Based loosely on Gerhard Richter’s career, his coming of age in Dresden, escape to the West, painting studies in Dusseldorf, and phenomenal professional and personal success, this epic length movie moves briskly through its three hours plus: it’s a love story with a potent villain played by Germany’s uber romantic hero, Sebastian Koch, with young lovers Tom Schilling and Paula Beer. Schilling’s Kurt makes his breakthrough discovery of collaging gauzy images of photos from the past.

In a traditional movie narrative, this filmmaker depicts Europe’s destruction by the Nazis, euthanasia of mental patients, political loyalties and injustices and its aftermath. As in his Oscar winning “The Lives of Others” (2006), a potent message comes forward: Yes, Germans suffered too.

At a special New York screening hosted by documentary filmmaker Katherina Otto-Bernstein in her art-filled townhouse, Florian Henckel von Donnersmarck spoke about his inspiration in making this film, how he wanted to explore art’s immense allure: “Art has the possibility of making us feel that life is worthwhile. I didn’t know that much about Gerhard Richter, except for the picture he called “Mother and Child;” later he revealed this was a picture of his aunt who was murdered after she was institutionalized for schizophrenia. The father of the woman Richter married was a high-ranking Nazi who was responsible for sterilizing the mentally unstable in such an institution. The past continued to haunt Richter in terms of his father-in-law. I thought, there’s enough in there to tie the elements together.” More hidden was his exploration of the nature of evil.

Sebastian Koch’s Professor Carl Seeband in “Never Look Away” is a bit like Satan in Milton’s “Paradise Lost,” the most compelling, charismatic evil character. When asked about this casting, Florian said, “I went to him and said, I wrote this atrocious character for you. He replied, ‘Why can’t I play the hero?’ Then he offered me his house by the lake to write.”

“Koch didn’t work for a year to prepare for this part. He said, ‘I have to understand this character from within. How could a person commit these terrible crimes?’ The sad part is, that’s how it was. This story pales compared to other things the Nazis did, but is in itself so awful. So often the most horrible people did get away. They went free.”

Richter’s father-in-law was truly an atrocious human being; died in 1988, a highly decorated doctor, unpunished. If we need punishment, we will be disappointed. There is still a way to look at this as a triumph. The good side won. We have to look at our victories. This is the triumph of art and truth.”

As to Gerhard Richter’s response: Florian traveled with Richter to the places of his youth. He understood: “I was not making a biography of him but another work of art inspired by him. He does not want to see the film. Maybe this film is for everyone but Richter.”