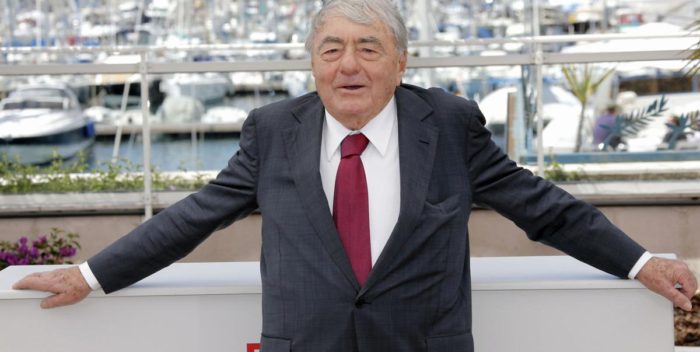 Claude Lanzmann has reportedly died today in Paris at age 92. His landmark film, “Shoah,” in 1985, brought the Holocaust out in the open, so to speak. The stories of the victims and the survivors shook the world and led the way to Steven Spielberg’s “Schindler’s List.” Spielberg named his Holocaust foundation after “Shoah,” the Shoah Foundation.

Shoah runs 566 minutes, or nine hours. It took 11 years to film the survivors. There is probably no more important documentary of the 20th century. You can read the New York Times review here.

Lanzmann never stopped working. He was in Cannes this past May screening “Napalm,” in which he revisited North Korea.

Irritating, irascible, the French intellectual writer and filmmaker, most notable of the epic length, 9-hour Shoah, Claude Lanzmann could be charming, and cunning as he got his desired interviews, thereby documenting the Holocaust, the most cataclysmic and defining event of the twentieth century, even as some deny it ever happened. Some call Shoah (1985) the quintessential documentary.

A lover of Simone de Beauvoir and friend of Jean-Paul Sartre, Lanzmann’s life meshed with those of other French intellectuals. As an interviewer, Claude Lanzmann knew what he was after. A younger Lanzmann is seen chain-smoking in trendy sunglasses, finding his subject in Queens, a Holocaust survivor who cut the hair of Jews on their way to be gassed. “You know we both have to tell this story,” he speaks gently to the man as emotion builds on his face. Even in the 9 hours of Shoah, this man is memorable as he tells of women he knew, naked, stripped of dignity and hope, coming into the room. How easily the imagination fills in the horrific aftermath, even as the barber’s words transfix.

After Lanzmann filmed survivors for Shoah in 1975, for example, he teased out several interviews for stand-alone films. Sobibor, October 14, 1943, 4 P.M., about an uprising at one of the camps, gives lie to the belief that Jews did not resist their processing through the Nazi death factories. Memorable is the sound of geese covering the sound of systematic murder. In 2014, he released The Last of the Unjust, focused on Benjamin Murmelstein, third and last president of the Jewish Council of the Thereseinstadt ghetto in Czechoslovakia, who fought with Adolf Eichmann on matters of liquidating the Jews, and how best to complete the final solution.

For him, Hannah Arendt’s summation of Eichmann’s “banality of evil,” is pure rubbish; Eichmann was no bureaucrat, but a particularly inventive murderer. Claiming to have saved lives, Murmelstein, an erudite former rabbi from Vienna, was a controversial figure after liberation, accused of being a collaborator, but freed of these charges. What Claude Lanzmann has said about his film Shoah works for his treatment of Benjamin Murmelstein, his other film subjects, and his world view: “I am not here to judge.”