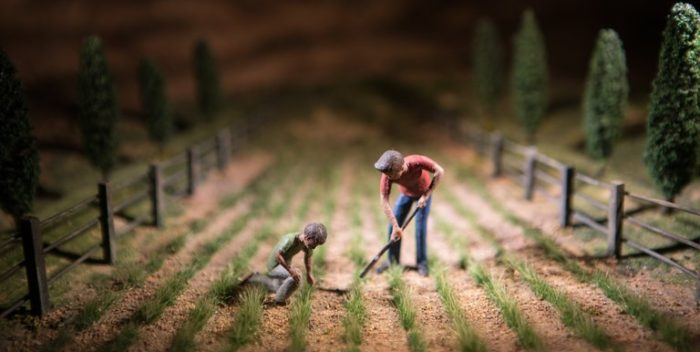 The brothers—Kabir (Nalini Chetty’s voice) and Aryan (Farshid Rokey)—composites of the author’s interviews with many young people on such a nightmare odyssey, appear as figures in diaramas as they rotate on a carousel; the viewer accompanies them across Europe as they encounter a not so nice “smiling man,” bird police, a freezer truck filled with hanging carcasses.

The tale goes light as they invoke the name Bruce Willis for inspiration, and, when some rich American-Iranian tourists buy them food and new sneakers in Paris. But this story, told in Kabir’s 8-year old voice—well conceived with fine lighting and music—while enchanting, is no fairy tale.

At last week’s premiere, co-director Candice Edmunds, a resident of Glasgow, Scotland filled us in on Flight’s artistic achievement. Her co-director and co-founder at Vox Motus, designer Jamie Harrison, could not attend the McKittrick opening as he was working on the illusion design for “Harry Potter and the Cursed Child” as it transitions from London to New York.

Edmunds said they had originally thought this could be a puppet play, until they landed on the idea for this method of storytelling despite its many challenges: creating the tableau frames in a warehouse, and figuring out the best way for each viewer to experience Flight, solo, in a private cubicle wearing earphones to hear Mark Melville’s excellent music.  His soundtrack, by the way, could make for its own superb radio play.

Dioramas placed on a really large turntable flow by us, unpeeling the story. It’s quite an extraordinary idea. Enhanced by Simon Wilkinson’s theatrical lighting, “Flight” makes a powerful impression. But it is Rebecca Hamilton’s design and models, with their expressions, small and distinct, that stay with you, a haunting reminder of the experiences of children worldwide running from places where ordinary life is no longer possible. Kudos to Vox Motus. Combined with the haunting McKittrick, “Flight” is a rare night of brilliance.