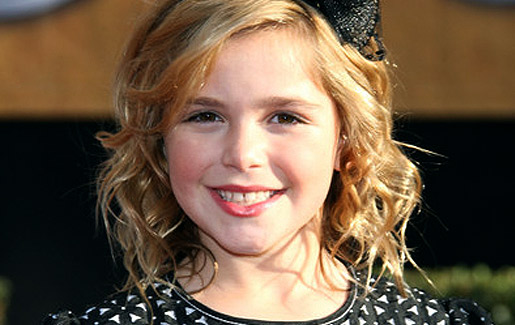 Yes, “Mad Men” has been renewed for a fifth season–this is not a surprise, folks–and negotiations continue between the show’s creator, Matt Weiner, and AMC.

But the best “Mad Men” news came today at the Hallmark TCA panel. Our Randee Dawn reports from Pasadena that the 11 year old actress who plays Sally Draper, Kiernan Shipka was the funniest one on stage. Shipka is in a Hallmark Channel movie. During questioning, she revealed she’s not allowed to watch  “Mad Men”: “I just focus on the Sally parts. I
know the general storyline, but I’m not allowed to watch the show.”  She also revealed that while she likes Justin Bieber, “I don’t know if I have Bieber fever or anything.”

Here’s Randee Dawn‘s report from the AMC and Hallmark presentation, and other notes:

As for Perry and Priestley, refugees from “Beverly Hills 90210.” they’re happy to be working together, but it does seem to have a doomed quality:
“We’re stuck with each other until death,” said Perry. “We’ve known that for a long time.”

AMC alerted the assembled that “The Walking Dead” will be returning with 13 episodes, more than double the initial order of 6 for the
first “season,” that “Mad Men” will “definitely” be coming back for Season 5 (meanwhile, negotiations continue with Matt Weiner), and
“Breaking Bad” is about to start shooting Season 4.

The network is getting back into Westerns with the series launch of “Hell on Wheels,”
a “post-Civil War revenge story,” while new series “The Killing”
(which follows one single murder investigation for at least 13
episodes – and which may not even be solved by then) looks promising….
Matt Olmstead (“Prison Break”) keeps on topic for A&E with his new
series “Breakout Kings,” in which convicts are enlisted to help track
down fugitives. One nice thing about consistent topics is that
Olmstead is able to bring characters from his “Prison” show onto the
new series: Favorite “Prison” villain T-Bag, played by Robert Knepper,
was announced as a planned guest on the new show.

But, noted EP Nick Santora, “We don’t want it to be a reunion show,” so don’t expect too many more of the criminal element…. Lifetime has announced five pilots
are going to order and will double its slate in 2011 to include four drama series, with 15 original films planned for later this year.

One new series is Heidi Klum’s “Seriously Funny Kids,” which should go
gangbusters unless you’re of the popular belief that Germans are not
terribly humorous. Klum will interview kids for humorous effect and
help prank them lightly; she noted “I don’t think anything like this
has been done before,” clearly unaware of either Art Linkletter or
Bill Cosby, both of whom made a stab at this same subject matter….