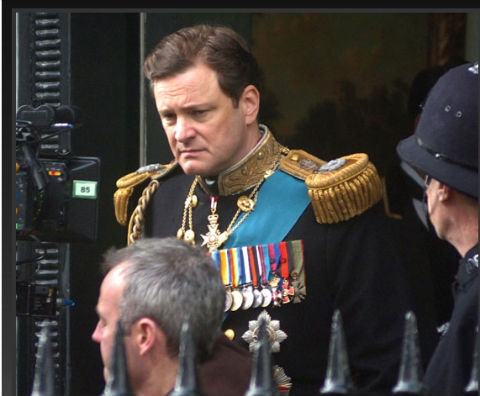 British actor Colin Firth celebrated his 50th birthday here at the Toronto Film Festival last night and got the best gift ever: a standing ovation, thunderous applause, and cheers at the end of his momentous speech as King George VI in “The King’s Speech.”

Firth shared the wild reception with c-star Geoffrey Rush, director Tom Hooper, and of course, a much relieved and relaxed Harvey Weinstein. This team knows they’ve hit a home run. Now the work begins: to keep up the momentum but not overdue it. “The King’s Speech,” like many good films here, has a long road ahead of it through the holidays and then to awards season.

Over at an elegant dinner at the Windsor Arms Hotel. guests like famed director Fred Schepisi lined up to congratulate the King’s court– and Firth on his birthday. Looking at him, it doesn’t seem possible that he’s 50. And yes, we did check for scars or any evidence of a scalpel. Nothing!

And here’s a good story from the filming of “The King’s Speech:” it turns out that the real London building that was used for some key interior scenes — the setting for Rush’s home office, etc–was a building that King George VI had visited back in the day.

These days, however, the basement level has a different use altogether: it’s a pole dance studio. “There are a bunch of stipper’s poles,” Colin told me. “As the day went on while we were shooting upstairs, there was a much differet clientele passing us in the hallways.”

A very different experience than speech therapy. But perhaps that might have helped old King George even more!

PS See those medals Colin’s wearing in the picture? They’re all he got to keep from the shoot. None of them were for pole dancing, however…