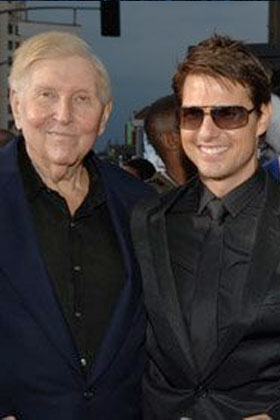 It was just three and three quarter years ago that Sumner Redstone kicked Tom Cruise out of the Paramount nest. Cruise’s crime? Jumping on Oprah’s couch, picking a fight with Matt Lauer — acting, basically, nuts.

Redstone didn’t like that stuff. He ended Tom’s deal at Paramount, and pretty much sealed him off from another “Mission: Impossible.” Tom went to MGM, took over United Artists, and made the dreadful “Valkyrie” after the boring “Lions and Lambs.”

Now, as Cruise awaits release of “Knight and Day,” with Cameron Diaz, Redstone is a fan again. Maybe he’s seen an early cut of “Knight and Day” and really liked it. All I know is this: Cruise and Katie Holmes, mother of Suri, were seen once again dining with Redstone over the weekend. This time the setting was Il Piccolino on North Robertson.

“Since Tom no longer has Paula Wagner, he’s working out the details of the next “M:I” himself,” says a source. Oy vey. At least Cruise has a director this time, J.J. Abrams. Back when he wanted to make “M:I 3″ Cruise shopped around for a long time. He ordered up a trailer for that movie before it was even made, and held auditions at his house for the directors he had in mind.

So what are Tom and Sumner talking about on all these “dates”? They don’t have a lot in common. Redstone is Jewish, almost 87 years old and from Boston. His father, a nightclub owner, was a business associate of Barbara Walters’ father, Lou. Tom is a Catholic turned Scientologist, 47, and from an itinerant family that settled in Missouri. It’s unlikely Redstone’s interested in hearing about L. Ron Hubbard and space aliens. It’s equally doubtful that Tom wants to hear stories from Boston in the 1940s. If they’re sketching out the plot for “M:I 4,” someone had better tell Paramount’s Brad Grey.