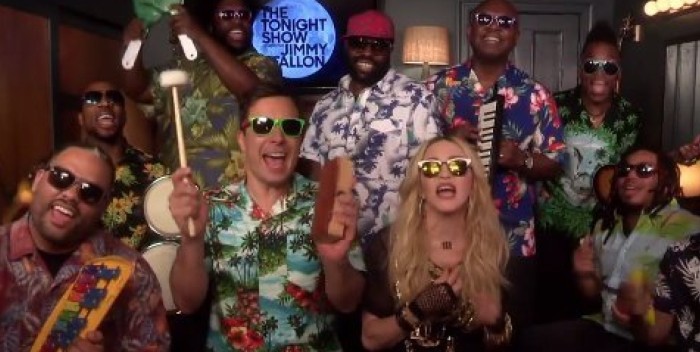 Now, you can say it, kids: Madonna is back. Her appearance on Jimmy Fallon’s “Tonight” show was a confirmed success. Her album, “Rebel Heart,” was just about dead on the charts. But this afternoon, “Rebel Heart” is number 20 on iTunes with a bullet, moving from around number 84 to 32 to where it is now. Well played.

There’s more: The original “Rebel Heart” EP of five songs, released in a hurry after Madonna was “pirated” early on, is at number 42. And the song she cleverly performed “Bitch I’m Madonna” is at number 107 out of nowhere. My guess is the song will pick up momentum and perhaps become an unqualified hit. Wouldn’t that be something?

(A friend suggests that they just release the Fallon performance as a video, and skip Madonna’s usual $10 million follies.)

Even more interesting: The digital download of “Rebel Heart” on Amazon.com is number 37 and rising fast. This means that Amazon customers, who usually like the physical CD, had a big impulse buy after Fallon and just wanted the album. They couldn’t wait for the mail.

Madonna and manager Guy Oseary took a page from Barbra Streisand and manager Marty Erlichman. Streisand’s Fallon show propelled her duets CD, “Partners” into the stratosphere. Madonna’s Fallon segment was crafted similarly— Madonna was dressed in accessible way, no crazy nudity or sex talk, just fun, witty stuff. Her comedy routine was a dud, but it was in good fun so no one cared.

Game of Thrones author on who will die this season

The “Holiday” segment– performing her old hit live with Jimmy and the Roots– was a home run. But the coup de grace was the choreographed version of “Bitch” through the NBC hallways. It was ebullient and infectious. The old Madonna is back!
And yes, that’s Madonna’s 14 year old son Rocco in the video: