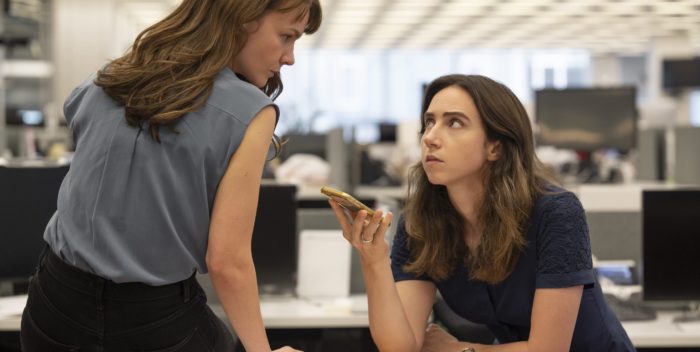 “She Said “ is a straightforward gem of a film determined to show that  with determination, professionalism and dogged truth seeking, the Goliath that was the powerhouse producer Harvey Weinstein could be brought down.

Sharply directed by Maria Schrader (I’m Your Man, UnOrthodox) and crisply written by Rebecca Lenkiewicz, the film is based on the book of the same name by New York Times journalists Jodi Kantor and Megan Twohey. On October 5th 2017, The New York Times published a bombshell report about a semi-open Hollywood-and-beyond secret; that Weinstein had been sexually assaulting women for decades.  The article and the subsequent ones not only earned them the Pulitzer but more importantly served as the catalyst for the #MeToo movement, opening the door for women to end the silence around sexual harassment and assault.

Carey Mulligan as Twohey is simply captivating.  Wry, tough Zoe Kazan as Kantor is equally so.  The duo portrays these reporters as the real deal.  Not glamorized, not saints, but women who want to right a longtime wrong.  The mountains of obstacles, push back, dead ends, and walking the tightrope of uncertainty and doubt in every moment they face is fascinating and gripping to watch.  The complicity and how he was protected by layers of power, the intimidation that was supported in numerous ways, including numerous secret settlements and NDA agreements.  All would have gone ‘unnoticed ‘save for these hard-working journalists with integrity and honesty and steel like tenacity.

Schrader tells the story in an expertly artful and purposeful way. The courageous victims, many who came forward included Ashley Judd playing herself.  All are part of the incendiary narrative.  When Megan tells one woman that “I can’t change what happened to you in the past, but together we may be able to help protect other people,” it’s a cinematic shattering moment.

The journalists also had personal lives that needed tending.  Megan dealt with postpartum depression after the birth of her first child and Kantor had two young daughters at home. Their camaraderie and their willingness to go all in is truly admirable, but the pressure of it all of course gets into their bloodstream at times.  Mulligan lets pent up anger boil over in a memorable bar scene.  The supporting players are equally as formidable. Peter Friedman as Weinstein lawyer Lanny Davis, Jennifer Ehle as Lauran Madden, Angela Yeoh as Rowena Chiu are all terrific.  Samantha Morton as Zelda Perkins and Ashley Judd playing herself are sincere standouts of the film.  Their scenes are gut-wrenching.  Patricia Clarkson as The New York Times editor Rebecca Corbett and Andre Braugher as the tough as nails executive editor Dean Baquet are equally good, more of them would have been most welcome.

The film is a call-to-action and Nicholas Britell’s haunting score beautifully adds to the drama.  Twohey and Kantor’s sincere dedication, relentlessness and professionalism to seek the truth and justice for the many women that were wronged are shown perfectly in this deftly written and impeccably directed gem of a film.

“She Said,” is a Universal Pictures Film which will be released in theaters on Nov, 18th, 2022.