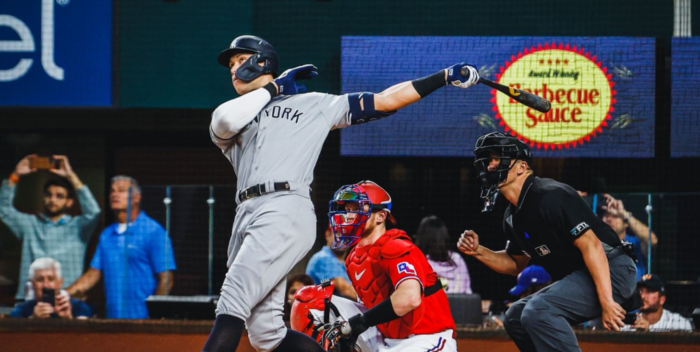 Our long national nightmare is over. Aaron Judge hit his 62nd home run tonight, surpassing Roger Maris. It’s been 61 years since a Yankee hit 61 home runs, and now Judge has broken the record.

But after the All Star Game in July, injuries plagued the team. Suddenly the dream was a nightmare. We lost and lost and lost. Painful losses, Stupid losses. What seemed unforgivable at the time.

All though the summer, one thing worked: Aaron Judge. He just kept hitting homeruns. He didn’t care about his own record. He was only concerned about helping the team.

Since the end of August, Yankee luck picked up. But Judge never stopped. Even when he hit a seven game drought trying to make number 61, he stayed in good humor. How he managed the stress is anyone’s guess. He just didn’t let it affect him.

Now the Yankees will have to pay up. They are in a tense contract negotiation. But there are no Yankees going forward without Aaron Judge. The Steinbrenners will have to mortgage the stadium. How much can he be paid? What can they give him? Cars? Jewels? Houses? Bobbleheads? Whatever it is, it’s his.

So Bravo to Aaron Judge and thank you for making this relatively grim year seem not so bad after all. And kudos to Roger Maris, Jr, and his family for being there the last two weeks, and demonstrating the description of graciousness.

PS Like Roger Maris Jr. I do not acknowledge the National League homerun winners who used performance enhancing drugs. Aaron Judge is the home run king of baseball.