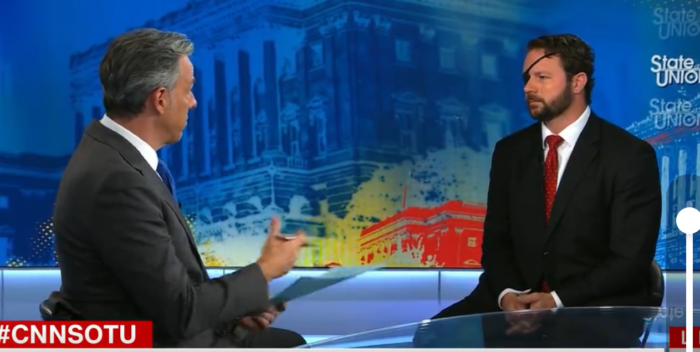 If you slept in a little this morning, you missed the end of Jake Tapper on CNN.

While Brian Stelter interviewed Carl Bernstein on the last episod of “Reliable Sources,” I watched Jake Tapper take a dive on his “State of the Union.” The State of Tapper’s integrity is dead, frankly. After endorsing Jared Kushner’s book, Tapper let despicable eye patched conservative creature Dan Crenshaw spout lies about the January 6th committee, promote the Former Guy, and talk almost uninterrupted. Watch below as Jake actually says, “There’s a lot we don’t know, so I can’t defend anything,” referring to the raid on Mar-a-Lago. You will throw up your cereal.

Tapper has obviously been ordered by the new CNN to go along with their new mind control, aiming at “less partisan” discussion. The result is that the inmates are running the asylum. Why didn’t Tapper just quit? High mortgage payments? Big private school commitments? This is so beneath him. Between this and the Kushner endorsement, Twitter is raging. CNN may have no viewers by Monday. James Earl Jones may take his voice away.

CNN’s @jaketapper questions @DanCrenshawTX about the seizure of classified documents from former President Trump’s Mar-a-Lago home and the backlash from other Republicans. @CNNSotu #CNNSOTU pic.twitter.com/trZdcu09GS