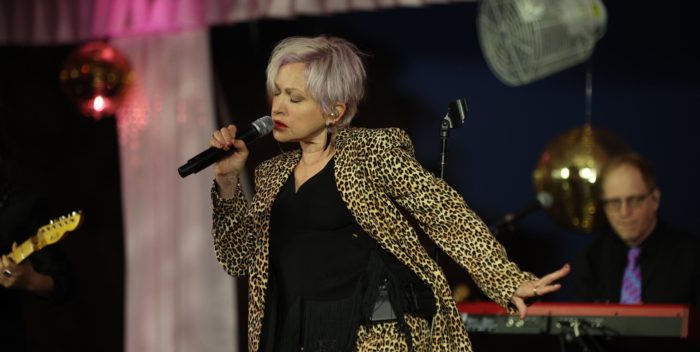 It’s not often that CYNDI LAUPER makes personal concert appearances for charity. But last night in the Southampton village of Water Mill, Lauper and her band rocked out a tentful of high paying guests who came to support the Katz Institute of Women’s Heath at Northwell Health’s new Manhattan women’s center.

Cyndi, dressed in a leopard print outfit and sporting pinkish tinged hair, opened her set repeating John Lennon’s once famous announcement to a crowd of royals: “Rattle your jewelry!”

Lauper and her crack band opened the set with “She Bop,” and by the time she hit her second number, “Time After Time,” suddenly the entire guest list was up and dancing across the floor of the dazzling tent set against a spectacular sunset thanks to host Vicki Moran Furman.

Cyndi didn’t mince words about the current state of abortion laws in this country and the need for girls and women to get more help than ever. She punctuated her comments by playing her moving anthem, “Sally’s Pigeons.” In the fall she said she’ll be launching a new foundation to bring OB GYN care to women who can’t afford it across the country.

She wrapped the set with “Girls Just Want to Have Fun” — which sent the crowd swirling in dance with hands raised above their heads — and “True Colors.”

What impressed me is how beautifully executed Lauper’s set was. She is a consummate musician, and her band is formidable. Not only has her voice grown over the years, but the richness of the songs has never aged either. The Tony winner (“Kinky Boots”) is prepping another hit Broadway musical, based on the movie “Working Girl,” with a book by Theresa Rebeck. (Yes, she’s also won an Emmy and a couple of Grammy awards).

Fox5’s star anchor Rosanna Scotto emceed the night, titled “SHE: Summer Hamptons Evening” which raised almost $1 million and was produced by Lawrence Scott Events, who should get a Tony Award for his stunning projects…

It was a crazy busy night in the Hamptons, the height of the long summer. Over at Herrick Park in East Hampton, the town library returned to full function for the annual writer’s event. Four dozen or so authors were gathered under a huge white tent, sitting at tables and signing their books. Sales of the books go directly to the Library.

Among the authors: Katie Couric, Tovah Feldshuh, Robert Caro, Nelson DeMille, Jeffrey Lyons, Monte Farber and Amy Zerner, Alan Patricof, Neil DeGrasse Tyson, Mike Lupica, Marie Brenner, Bill Boggs, Cati Marton, David Maraniss, Tina Brown, and Robin Baker Leacock were among those who greeted crowds of excited fans, a lot of whom were well known or famous in their own right.  After the signing, a total success, guests peeled off for dinners at private homes where they got all the good gossip. You know, East Hampton is just like any other small town in America!

BACK IN MONTAUK…gifted local artist Anne Raymond opened a new show at the startup Lucore Gallery. What a treat. You can see her latest paintings — titled Skyfall– on her website. I’ve no doubt the whole lot sold out quickly. I could have moved furniture in and lived in that room of her work. Raymond’s skies are filled with vivid colors and abstract notions immediately welcoming no matter if they’re cheerful of turbulent. And Raymond, who I wanted to meet, turns out to be a dynamic force who started out in Dallas but moved to New York as soon as she could. Can you blame her?