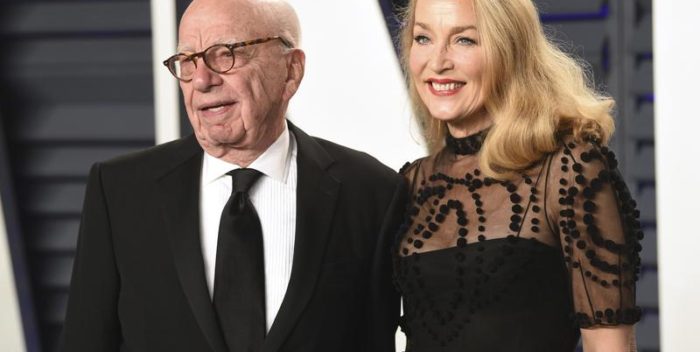 Jerry Hall will never be anyone’s Beast of Burden. The mother of four of Mick Jagger’s children has asked a Los Angeles court to dismiss the divorce petition she filed five weeks ago against aged right wing publisher Rupert Murdoch.

Hall has evidently reached a settlement out of court with Murdoch. If he hadn’t caved to her demands, Murdoch’s finances would have been splashed all over the place in open court.

There would have been a lot of press attention except in publications he owns, like the New York Post. They have yet to report that Hall and Murdoch even separated.

It does seem like Murdoch’s adult children pushed ol dad to dump Hall before they would have to deal with her in his estate. They were married six years. Now Hall presumably will be set for life without having to ask Mick Jagger for help. So it all worked out. Murdoch has so much money he won’t miss a few mil, not to mention a house or two.

Murdoch has been married a few times. He’s 91, so he could fit in a few more tries, at least one. His kids may miss Jerry since she was at least taking care of him, something none of them want to do.