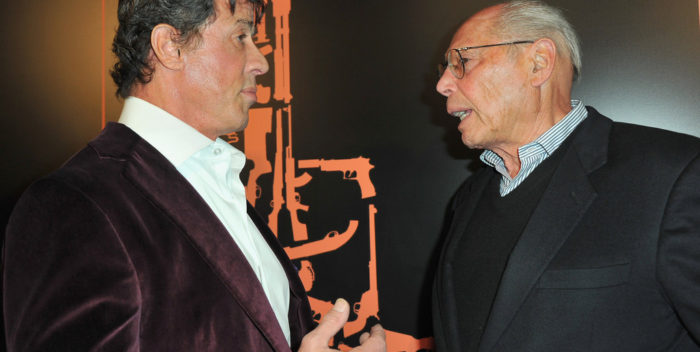 Who knew that Sylvester Stallone harbored such ugly feelings for Irwin Winkler all these years?

Winkler produced “Rocky” in 1976, then all of its sequels. He owns the rights. No one knew who Stallone was before those days. And that’s what happens: producers buy rights and own them until they expire.

Stallone, however, has a different take. As you can see from this post, he wants the “Rocky” rights back for his children. It’s not like Sly is broke. His net worth is in the hundreds of millions. He is also represented by Hollywood’s most vicious law firm, Lavely and Singer. If Sly was so unhappy over the years, certainly Marty Singer could have stepped in. Why Sly went public like this is a mystery.

Winkler produced all the Rocky movies with Stallone, including three “Creed” movies, but also most of Martin Scorsese’s films including “Goodfellas” and “The Irishman.” He is highly respected.

Sly first posted this illustration of Winkler as a snake. Then he writes:
“A VERY Flattering portrait of The Great Rocky/ Creed Producer , IRWIN WINKLER, from one of the country‘s greatest artist … ALSO after IRWIN controlling ROCKY for over 47 years , and now CREED, , I really would like have at least a little WHAT’s LEFT of my RIGHTS back, before passing it on to ONLY YOUR CHILDREN – I believe That would be a FAIR gesture from this 93 year old gentleman ? … This is a painful subject That eats at my soul , because I wanted to leave something of Rocky for my children, but it’s always great hearing from the loyal fans… Keep Punching”

In a previous post, Stallone went after Winkler’s son, who’s been a producer and an author. Sly compares David Winkler’s new book, “The Arrangement,” to “toilet paper.”

“If you ever run out of toilet paper PLEASE by this one you won’t be disappointed. It’s very absorbent… This unbearable worthless dreck was written by the painfully untalented David Winkler who is the son of the remarkably untalented and parasitical Producer of Rocky and Creed…”

What the heck? Winkler, 91, has always been considered one of the nicest guys in Hollywood. Everyone loves his wife, Margo. What a shame that this is how things have developed.