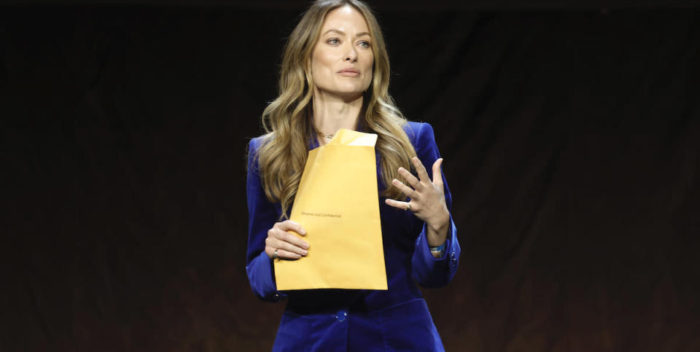 Slap! A figurative slap in the face for actress-director Olivia Wilde.

It’s the second biggest Hollywood slap of the Month.

Deadline and other onlookers report that while Wilde was presenting the trailer for her new movie on stage at Cinema Con in Las Vegas, a process server walked down the aisle and served her with papers. Wilde reportedly accepted them, saying, “Is this for me?”

The papers were from ex-lover and baby daddy Jason Sudeikis, Emmy winning star of “Ted Lasso.” They are thought to be custody papers.

Wilde and Sudeikis, who have two kids, a boy and a girl, split last year. She started dating much younger pop star Harry Styles, who reportedly moved into her house. Styles stars in Wilde’s next directed film, “Don’t Worry Darling,” with Florence Pugh.

This is good stuff, right? Was there no other way to serve Wilde but in public and during her presentation? We thought Ted Lasso was the ultimate good guy. But maybe he had enough of Styles hanging out in Olivia’s House. Styles’ new album is called “Harry’s House,” you know.

What are the issues? Who knows? But “Ted Lasso” films in London. Maybe Sudeikis wants the kids with him in Blimey.

Variety quotes an unnamed source, which means a publicist for Sudeikis. It’s not in the realm of believability but here it is: “Papers were drawn up to establish jurisdiction relating to the children of Ms. Wilde and Mr. Sudeikis,” the source said. “Mr. Sudeikis had no prior knowledge of the time or place that the envelope would have been delivered as this would solely be up to the process service company involved and he would never condone her being served in such an inappropriate manner.”