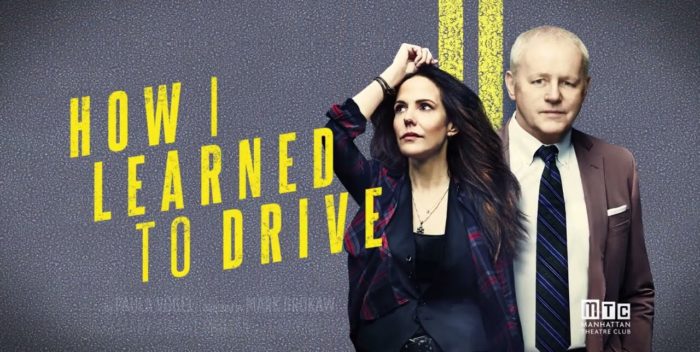 Ewwww! That’s not my critique of Paula Vogel’s tight memory play, “How I Learned to Drive”– rather the play, now having a Broadway debut after 25 years– is brilliant. It’s the people: the family.

At center, Uncle Peck and Li’l Bit (the sublime actors David Morse and Mary-Louise Parker) who originated these roles Off Broadway all those years ago. He held her in his hand as she was born, he says. He says he’s loved her every day, from that time, and when she was eleven, and he asked to unbutton her shirt as she sat on his lap. “Only if you want,” he said — and continues to say it even when he courts her with gifts and encourages her consumption of martinis. And teaches her to drive. Which becomes a structural device marking scenes but also providing a nuanced and loaded language: avoid reverse gear and idling.

That day, when Li’l Bit was eleven, was the last time she had any agency over her body. She knows it, too. She tells Uncle Peck just that, echoing the trending words of today’s “Metoo” survivors, giving the play a special poignancy. “How I Learned to Drive” traces just how easily one man’s charm can overwhelm a woman’s vulnerability, even as a mother, aunt, grandmother, grandfather note the signs of this grooming with more resignation than attention.

Johanna Day was in the original production as mother and her sister, Aunt Mary, married to Uncle Peck. Alyssa May Gold, is way too young to be a grandmother, a nice touch as much of her child bride backstory is revealed. Chris Myers plays the other male roles, including a rude classmate fixated on Li’l Bit’s bosom. If anyone has ever wondered how such transgressions occur, the stages are acted out here at the Samuel J. Friedman Theater under Mark Brokaw’s fine direction, peeled back non-chronologically, as the mind brings forward the salient painful moments.