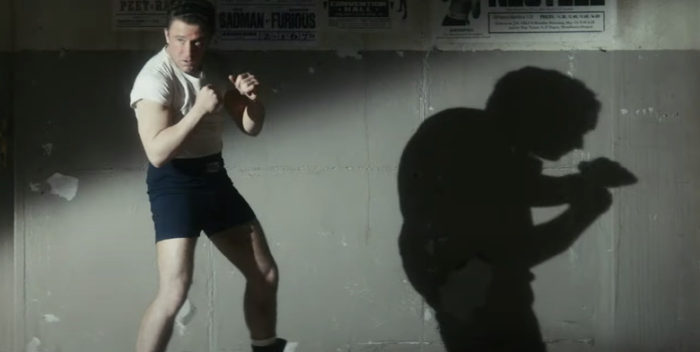 Foster gives the performance of a lifetime as Harry Haft, based on the book by Haft’s son, Alan. Harry literally fought his way out of Auschwitz with boxing gloves.

Picture “Raging Bull” meets “The Pawnbroker.” Imagine the violence, the searing impression of the blood oozing out of the fighters—with Haft so gaunt, so spent, you cannot even think of his having body fluids in his vividly depicted post-war visions, triggered even on his honeymoon when he marries Miriam, Vicky Krieps in a tender role. They go on as survivors do, having three kids, managing the past as best they can—singing “God Bless America” in Yiddish.

As Auschwitz survivor stories go, Harry Haft’s exceeds the norm. Grasping his world in the camps and beyond in Brooklyn, Foster gets Haft –as boxer and as nightmare-ridden refugee. Told in two-time frames, “The Survivor” pares down Haft’s experience: the Holocaust period in black & white when he is made to entertain the Nazis using his skill as a boxer. Nazi officer Dietrich Schneider puts him in the ring fighting fellow prisoners to their death. If you thought Billy Magnussen was “bad” in the recent James Bond movie, here he brings his super-bad game, “owning Haft,” as it were. In color, survivor Haft fights in the rings of Coney Island, fighting even Rocky Marciano, with one goal shaping his American existence. That is, to find Leah (Dar Zuzovsky), his love from before the war.

At the former Four Seasons, Alan Haft milled through the crowd that included Foster’s actress wife, Laura Prepon, Maggie Gyllenhaal (there with husband Sarsgaard), Tova Feldshuh, among many others– showing covers of his dad in vintage boxing magazines. He let us know that Harry had actually survived six camps, and that some of the relatives refused to attend the premiere because of their own memories of his abuse as he struggled with his—what we now call PTSD. When asked why the screenwriter, Australian Justine Juel Gillmer, was chosen over a Jewish writer, producer Scott Pardo said that only she of all the men they interviewed got the love story at the film’s center. “We did not want only Raging Bull,” he said.

The hope is that this film will have the “Schindler” effect, that it will raise the consciousness of Jews and gentiles alike to deter acts of dehumanization, and to respect those who seek safer places. Then again, it’s a very cool boxing movie. Then again, it’s a romance.

Preparing, Barry Levinson took his cast to Auschwitz for a look at the infamous camp. Ben Foster vowed to take his children there. Eschewing the technology that could have changed his physicality, this fine actor wanted to be real; he lost and gained 60 lbs. “This film is so important to me.”

PS Emmys for Levinson and Foster, would have been Oscars if this film had gone to theaters. So glad HBO snatched it up.