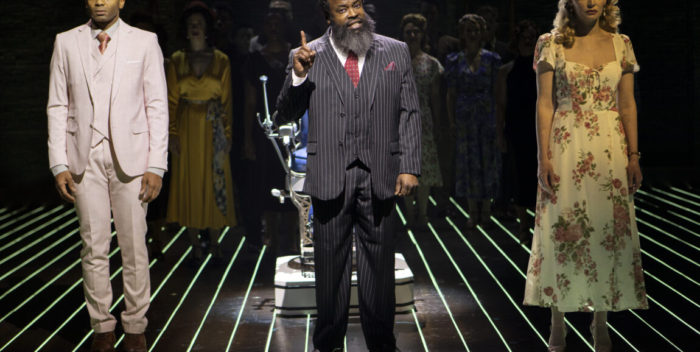 Is there a new “Hamilton” brewing out there, off Broadway? Some say “Black No More,” a musical adaptation of George S. Schuyler’s Afrofuturist 1931 Harlem Renaissance novel, has the feel of something that may go off the charts in the manner of “Hamilton.”

A new production from The New Group, “Black No More” features a stellar Broadway cast led by powerhouse Tony winning vocalist Lillias White, and Tony-Emmy-Grammy nominee Brandon Victor Dixon, of “Hamilton” and “Jesus Christ Superstar fame.” The show’s ensemble of excellent singers and dancers tell a tale of contrasts: the exciting free, artsy denizen of Harlem vs. the racist “crackers” of Atlanta and how they handle their Black folk.

Needless to say, whites do not fare well in this scenario, despite the efforts of fine performances by such actors as Theo Stockman as the chief villain Ashby Givens. A young man named Max (Dixon), after a night of flirtation with a white woman (Jennifer Damiano, a Broadway star at this point) in a Harlem club, is persuaded to follow a dream of pursuing her by taking advantage of the opportunity to become white.

Against the protests of his friends—great work by Tamika Lawrence as Buni and Ephraim Sykes as Agamemno, — Max follows the science of Dr. Junius Crookman (Tariq Trotter) whose name says it all. To the credit of this production, the audience is moved to suspend disbelief. And Dixon takes on whiteness to a fault, changing his name from Max to Matthew. He follows his dream girl to Atlanta, and is so persuasive a speaker against black culture, he becomes a leader in the community, and marries his dream. Be careful what you wish for.

There’s a lot of star power here. Scott Ellis is the director. Tariq Trotter of the Roots wrote the lyrics to the songs and the music with Anthony Tidd, Daryl Waters, and James Poyser (also of the Roots). John Ridley, who won the Academy Award for his “12 Years a Slave” screenplay. wrote the book.  He’s also in the cast. At a talk back after a preview s week, Trotter of The Roots said  he took his first meeting about writing the music and lyrics for “Black No More” on the very day he saw “Hamilton” at the Public Theater.

The Roots’ MC further explained the work’s grounding in the history of American music—actually rap and hip hop, and his determination to explore Black experience. To that end, he never intended to play the role of Dr. Junius Crookman, a satiric figure determined to sell the science of making people of color white. But the actors who he imagined would play this strange figure—he named only one, the late Michael K. Williams — did not embrace “time,” as he called it (translation:  they didn’t respect respecting a rehearsal schedule). But he does not condemn: he knows lots of people like that, he said.