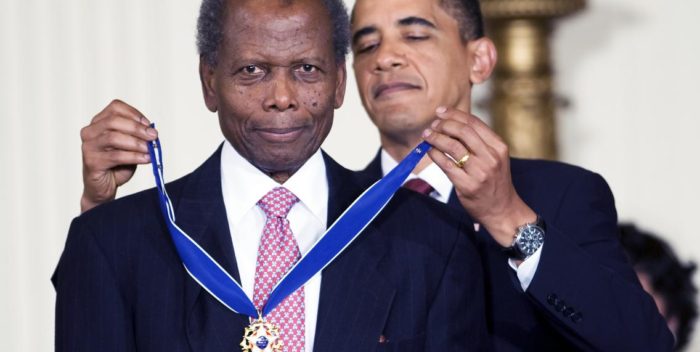 Sad news: the death of Sidney Poitier, the first Black superstar in Hollywood. Oscar winner, activist, trailblazer, Poitier’s importance to the history of Hollywood cannot be underestimated. He was 94 years old.

He was also a person. I got to meet him several times, some times in Spago, his favorite hangout, and other times at Hollywood events. Eleven years ago, at the Governor’s Awards for the Oscars, Sidney and his wife Joanna let me have the scoop about Poitier publishing his first novel at age 85.  He was always personable, funny, and gracious.

We also reminisced about his life growing up in Miami. Sidney knew my friend, the R&B Star Sam Moore, from his teen years. Their families were very close.

Sam write to me today:

We also reminisced about his life growing up in Miami.

“I am heartbroken to learn that Sidney was called home. Most people don’t know that when the Portier a family moved from Cat Island The Bahamas they relocated in Miami very close to where I was living with my mom and grandma in Liberty City So I’ve known Sydney and all of the Portier’s since I was a teenager roughly 70 years.
Anytime I’d see Sidney I would give him a hard time because it was his movies theme song sung by Lulu “To Sir with love” that kept Dave’s and my hit “Soul Man” from reaching #1 on the Billboard pop chart in 1967. Which fuss and then we’d laugh and hug. What a special special wonderful friend, talented actor and great humanitarian.
Rest in heaven my buddy.”

I’m not going to put up clips because TV is already full of them. But just so you know, he used to hang out with Tony Curtis at Spago in their later days, they starred together in “The Defiant Ones”in 1958, the movie that made them famous. I think the coolest thing about Poitier is that he only had friends in Hollywood, no enemies and there was never bad a word ever said about him. He was loved and he will be sorely missed.