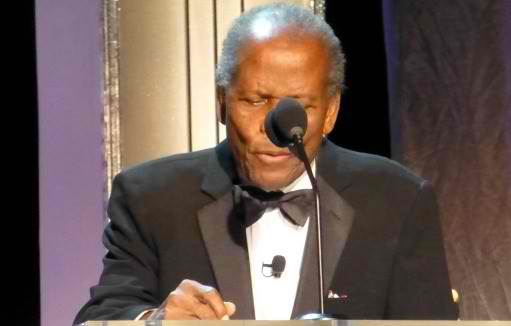 Sidney Poitier, real movie star, the legend, the Oscar winner, the author already, of two memoirs, is publishing his first novel next May. It’s called “Montaro Caine,” he and wife Joanna told me last night at the honorary Oscar gala at the Dolby Theater in Los Angeles. Sidney Poitier is 85 years old, my friends. That should give us all hope.

Poitier was the biggest star in a room that was like the entire galaxy last night. When he went on stage to present an honorary Oscar to George Stevens, Jr.–who runs the Kennedy Center honors, has directed and acted in many important films and comes from a dynastic Hollywood family–it was Poitier who got a standing ovation.

So what’s “Montaro Caine” about? “It’s sci-fi,” Poitier told me. “Sort of like Indiana Jones, but better!”

And the name Montaro Caine? The spelling of the last name should tell us everything–Poitier’s bff is Michael Caine, a bit of a swashbuckler in his time.

Poitier was one of several speakers who made last night so memorable. Each person who spoke — from honorees Stevens, Pennebaker, Katzenberg, Needham–gave a history lesson about Hollywood.

So did their witnesses– like “Godfather” producer Al Ruddy who told a story about producing a film directed by Needham which entailed accidentally shooting a missile across the old MGM lot and getting them into a lot of trouble.

And through the whole evening, the audience was rapt. Not a sound from this gathering of heavyhitters, no talking in the back. Everyone listened to everything that was said. Every event should be like this. Quite an experience. And believe me they hung on Poitier’s every word as recalled working with both George Stevens Sr. and Jr.