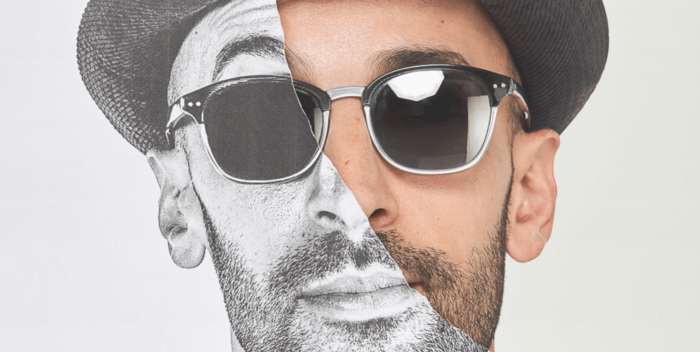 JR is back. Well, he never went away. Many people met him in the Oscar nominated Agnes Varda film, “Faces and Places.” The French photographer and (is word here) artivist’s collaboration with the famed filmmaker was infectious. His virus, a matchless enthusiasm for the creation of art, is impossible to describe: his energy is a force. Burroughs/Gysin had their “Third Mind, Ouevres Croissees” in French, a roadmap to artistic creation through collaboration. JR inherits their spirit along with Varda’s.

JR’s new documentary is called “Paper and Glue,” and it premiered this week at the Museum of Modern Art, sponsored by MSNBC. Movie star Bradley Cooper, his pal, introduced the nomadic JR to a heavy crowd that included famed filmmaker Barbara Kopple. Cooper, a bona fide movie star in awe, seemed happy to just to be in JR’s posse, a growing populace of fans and volunteers helping to build his outrageous installations.

In “Paper and Glue,” JR takes us to several locales: the US/Mexican wall, a California prison, the banlieu of Paris, favela of Rio, places we would never think to want to see. Infusing them with his je ne sais quoi, voila, they become the only places that matter, sites with superstars among the disenfranchised, the movie’s inscription from Varda: “If we opened people up, we’d find landscape.”

At the Southern Border we go to the Wall—yes, that Wall—someone even jokes about who is going to pay for it. JR erected a structure to paste a giant-sized photo of a small Mexican boy, waiting for the authorities to shut him down. Instead, they arrived and shared tacos. That’s just what you want to do with the irresistible JR. “Kevin,” a prison inmate sporting a swastika tattoo on his cheek, calls collect and JR picks up wherever he is. He sends Kevin a signed copy of Art Spiegelman’s “Maus.” Now, the prison system provides a tattoo removing system.

After the screening. the crowd, including Kopple but sans Cooper made their way to media magnet restaurant Michael’s, for a private celebration, as the restaurant is back in a big way. Even without Cooper JR, always hidden behind sunglasses, had an army of admirers. I asked, where do you stay in Rio? The favela looked so grim. He made a moon bedroom, literally, it looks like a giant bananagrams, in the Brazil sky. “The moon belongs to everyone,” he pointed out.