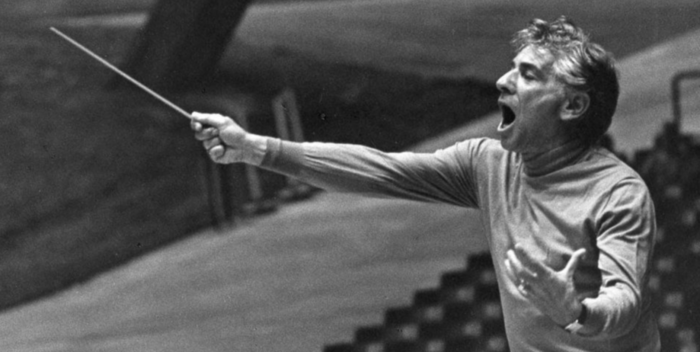 An elite group, many of whom knew Leonard Bernstein, gathered this week at Soho House in the Meatpacking District (technically the West Side) for a special screening of a documentary set for release in 2022. “Bernstein’s Wall,” a spectacular film about the great composer- conductor- pianist- music educator- humanitarian- antiwar activist, a fixture of 20th century American cultural history, previewed earlier this spring at the Telluride and Hamptons film festivals to raves.

Well-timed in a wave of Bernstein projects, the riveting film comes as Bradley Cooper finalizes his production of a fictional “Maestro,” and “West Side Story”   — Steven Spielberg’s movie of perhaps the most famous and oft-produced Broadway musical, composed by Bernstein in collaboration with Stephen Sondheim and Arthur Laurents — is set to sweep this year’s Oscars.

Tuesday’s screening and dinner hit every high note. Mercedes Bass,  the dynamic Vice Chair of Carnegie Hall — where Bernstein’s illustrious career was launched at age 25 — hosted the evening. It was at Carnegie Hall that Bernstein, who began as an understudy conductor, garnered his first ecstatic reviews. He later conducted at Philharmonic (now David Geffen) Hall to great acclaim. Both venues should be thrilled about Bernstein’s imminent Renaissance.

“Bernstein’s Wall” is not quite a biopic, as filmmaker Douglas Tirola makes clear—a proper one might be hours long. This film, comprising only Bernstein’s own voice from tapes and readings from personal letters, recounts the development of his process, and how music informed his life. It still manages to touch all bases: his political activism—starting with the dismantled Berlin Wall—a rousing moment in 1989 when he led an international orchestra in Beethoven’s Ninth Symphony  near the Brandenburg Gate celebrating freedom and German reunification –and coming to the “kotel” in Jerusalem.

Over tuna tartare and tenderloin, music mogul Clive Davis, who produced Bernstein’s music for ten years at Columbia Records, sat opposite famed bandleader Peter Duchin. Duchin attended Bernstein’s legendary parties, and remembered the infamous fundraiser that spawned Tom Wolfe’s coinage, “radical chic,” in New York Magazine. Duchin told me it was Bernstein’s wife Felicia’s idea to bring the Black Panthers to Park Avenue: “Let’s just hear what they have to say,” she advised. The not-so-glamorous event nevertheless made headlines. “It was serious, not frivolous,” Duchin recalled, “[J Edgar] Hoover thought we were all Communists.”

Duchin, by the way, will publish a memoir next month that will include the story of his successful battle with COVID in the spring of 2020. Doubleday is the publisher.

Nearby –at the long table, where multi-hyphenate entrepreneur and celebrity Martha Stewart chatted with composer Karen LeFrak of the New York Philharmonic, and writer/ historian Amanda Foreman. Though she did not know Bernstein, her father, noted Hollywood screenwriter Carl Foreman (High Noon), was black-listed by the infamous House UnAmerican Committee, another touchstone of the era’s politics limned in the movie.

“Bernstein’s Wall” is a winner, and a sure hit for 2022. The composer-conductor’s pulse was attuned to the movements of the day. Mensch that he was, he did not turn away. He fixed neither his nose nor his name. And even though Bernstein clearly states that at age 10 he wished his strict Ukrainian-immigrant father dead—the hard-working beauty supply company owner refused to pay for his son’s piano lessons—he came to understand and to love him.

Other guests included John Sloss, of Cinetic Films, who is negotiating the sale of “Bernstein’s Wall” to a distributor for release next year, as well as famed architect Daniel Libeskind, plus Jackie Williams, grandniece of the Duke of Marlborough, and Richard Gelfond, head of IMAX, with wife Peggy. (What a thrill it would be see to Bernstein conducting on an IMAX screen!)