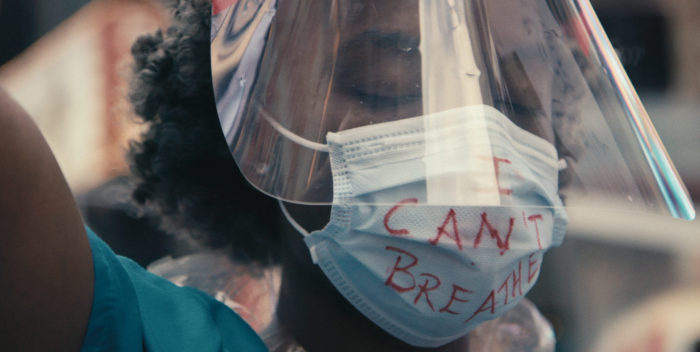 The opening night film is tough, warned a programmer at the beloved Hamptons International Film Festival, in person once again after the pandemic shutdown last year. “The First Wave” is directed by Matthew Heinemann, the documentary filmmaker who was embedded with Mexico’s cartels in his edgy doc, “Cartel Land,” so  of course it is tough. If you can insinuate yourself with murderous drug traffickers, might the hospital wards overwhelmed by COVID be a good subject? But here’s the unexpected: “The First Wave” covers a tough subject with enormous heart.

Ahmed, a police officer overweight and diabetic oozes pus on a hospital bed. A nurse, Kelly, knows he’s a family guy with young kids; she’s determined to help him make it through. He does not look so good, going in and out of ventilators. Not a good sign. We check in on him as he strains to have face time calls with his wife, Alexis, and their children.

Other families come into view: one is a woman who just gave birth now fighting for her life. You know these stories and hundreds like them. Here’s what makes you cheer: Karl, a hospital physical therapist who jokes Ahmed into his routines. Hospital workers clapping as survivors make their way out into the world and the arms of loved ones. The woman reunited with her new born.

Mix in, the convergence with Black Lives Matter after the murder of George Floyd, not a casual coincidence. We all know that the worst hit are Blacks. As New York  emerges as the most deadly locale, Andrew Cuomo surfaces as a hero, pulling everyone through, at least in this film’s insider view of the first four months. (Cuomo’s next acts will turn out to be quite different.)

Onstage for a post-screening Q&A, Ahmed gets a bear hug from Alec Baldwin who states he should be in every movie.

At SiSi, a re-creation of East Hampton Point, owned by the great Jerry Della Femina, was the site of a big after-bash. Della Femina and his wife, Judy Licht, were on hand greeting festival guests and filmmakers. Heinemann told me the  hardest part of making this film was knowing he and his crew were putting themselves at risk, possibly bringing COVID home to their families. Kelly tells me she’s expecting her third daughter, back at work, of course. And with a huge grin of pride, Ahmed tells me he’s back on his South Brooklyn beat.