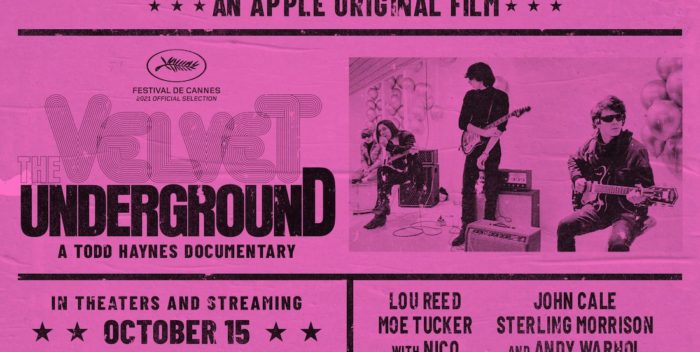 There was a grand plan for Todd Haynes’ new film, his first documentary, on seminal Sixties rock ensemble The Velvet Underground. They would bring extant founding members of the band like John Cale andMaureen (Mo) Tucker, for a performance at the movie’s premiere. That, sadly, was not to be. The premiere, though, with a posh party at Jazz at Lincoln Center, celebrated the creative energy from which the New York Film Festival emerged, and downtown artists for whom the Velvets were catalyst.

The documentary will debut on Apple TV Plus.

A vivid portrait of the band, yes, “The Velvet Underground” is a deep dive into the historic artistic period of New York in the ‘60’s, especially showcasing the avant-garde filmmakers who shot evocative footage: Andy Warhol, Jonas Mekas. The Warhol Museum in Pittsburgh is a treasure trove of this rare material. The great Ed Lachman shot the interviews in 2018: Mekas at 96 was first.

The film is an homage to these underground filmmakers as well as to Lou Reed, whose teen years on Long Island, complicated sexuality, and drug use provide the backstory for his artistic development. Studying poetry with Delmore Schwartz, Reed read Allen Ginsberg, William Burroughs, Hubert Selby, Jr., and Arthur Rimbaud. Early on, he proclaimed he would be a rock star.

When Welshman and Velvet classically trained musician John Cale first came to NYC, he gasped at the filth. In 1965, he formed the Velvet Underground with Reed. Performing at Warhol’s Exploding Plastic Inevitable multi-media events, the Velvets were soon were managed and produced by Warhol, who also created the iconic banana album cover.

How different were they? The story of a trip to Los Angeles where the Mamas & the Papas sing “Monday, Monday” makes that point. The Velvet Underground’s songs, mostly Reed compositions, speak about human frailty: “I’m Waiting for the Man,” “Heroin,” and a personal favorite, “All Tomorrow’s Parties.” The film reinforces their efforts at resistance, so lacking in today’s youth, said Haynes.

At the after party, Todd Haynes, surrounded by his crew—such as producer Christine Vachon — and a who’s who of downtown artists —- Jim Jarmusch, Sara Driver, Alex Gibney, Lee Rainaldo among them—-Lou Reed’s sister and her family—and loyal friends such as Julianne Moore said the archival films, performances featuring the elusive, gorgeous “chanteuse” Nico, were a gift. But add to that Lachman’s richly shot interviews, background colors inspired by Warhol’s portraits.

Some had only attended the Alice Tully Hall screening: Nan Goldin, Julian Schnabel, and Garland Jeffreys. A lovely black & white photo of Reed and widow Laurie Anderson appears at film’s end, but otherwise, she is absent. Lou Reed’s ex-wife Sylvia wanted to know whether the filmmakers were good to Lou. They were reverential.