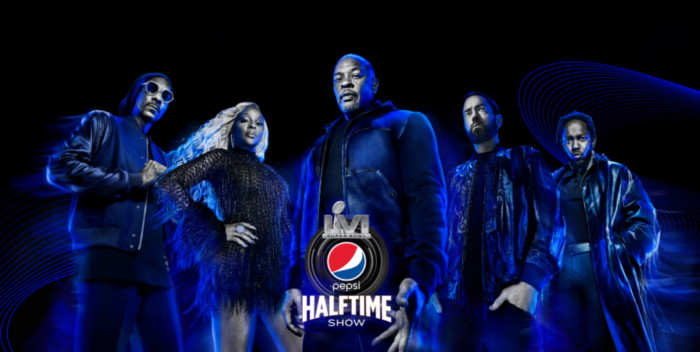 It was a couple of years ago that the NFL turned over its halftime show to Jay Z and Roc Nation.

This coming February we will see the fruit of that pact.

The half time show at SoFi Stadium in Inglewood, California (that’s kinda out hear the airport) is going be hardcore hip hop and rap. Today it was announced that the headliners will be Dr. Dre, Eminem, Mary J Blige, Snoop Dogg, and Kendrick Lamar.

The game is set for a week later than usual, February 13, 2022. It’s the first time in 30 years that the Super Bowl has been in Los Angeles.

They’re saying this “R&B” but it’s not, this is tough stuff, and not the usual middle of the road entertainment seen at the Super Bowl. At this rate they should get Missy Elliot to do the national anthem.

The NFL is trying to woo back the Black viewer, that’s for certain. What’s really interesting is that this at the expense of Colin Kaepernick, who still has no job in football. So all these artists are coming in in juxtaposition to that scenario. This year, the NFL is allowing players to put five different social justice slogans on their helmets. They’re also playing the so-called Black National Anthem, “Lift Every Voice and Sing,” before “The Star Spangled Banner.” So this part of that effort.

And Kaepernick? It’s been exactly five years since he took a knee and refused to stand for the national anthem. He was 28. Now he’s 33. Despite earning money from endorsements, his professional football career seems to be over. He played his last game on January 1, 2017.

For a while, Kaepernick had the NFL on the ropes. But then Goodell made this deal with Jay Z, who was quick to sell Kaepernick out, letting Goodell subvert him. How much did the NFL pay Jay Z to undo Kaeperick’s calls for spcial justice and awareness of police brutality against Blacks? It had to have been millions beyond our understanding.

Colin Kaepernick? George Floyd? It’s all about the Benjamins. And as I wrote the other day, NFL TV ratings are surging again. People have short memories.