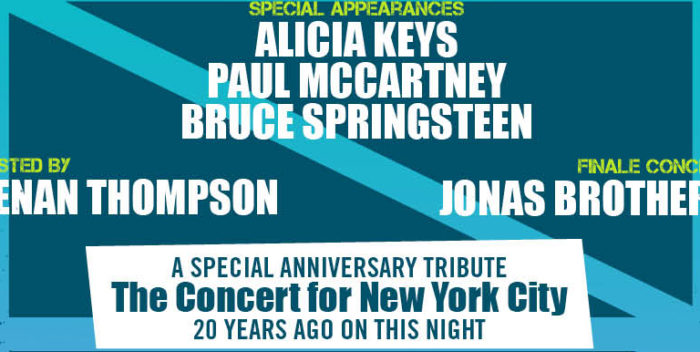 Twenty years ago Harvey Weinstein and John Sykes organized The Concert for New York after 9/11 for the Robin Hood charity. A ton of famous performers participated at Madison Square Garden.

So now Robin Hood is back with a 20th anniversary concert. Paul McCartney, Bruce Springsteen, and Alicia Keys will do something. The Jonas Brothers are putting on a show. The whole thing takes place October 20th at the Javits Center, long a venue for Robin Hood. The emcee is Kenan Thompson of “SNL” fame.

Co-chairs are Sykes, Serena Williams and Alexis Ohanian, Audrey and Danny Meyer, and Rachel and Neil Blumenthal. The latter is the founder of Warby Parker.  (Neil, I want to know why they’re not making my model anymore in the right color. We’ll talk!)

All the info is at www.robinhood.org. I went to a Robin Hood thing at the Javits once, James Brown performed. The richest people in town showed up and the bidding at the auction was cray-cray. Robin Hood is an elite organization but they are also incredibly philanthropic. NYC needs all the help we can get right now. So we’ve got to cheer this on!