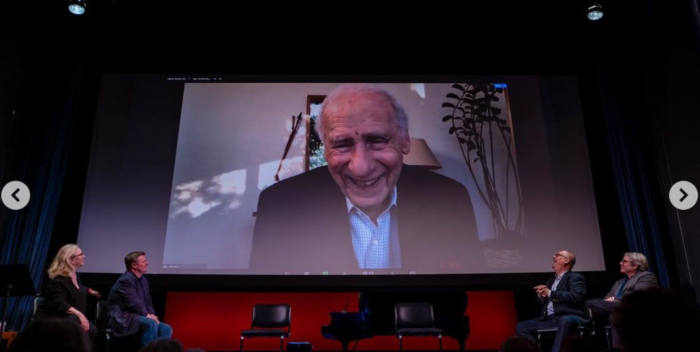 Mel Brooks may be 95 years young but that didn’t stop him from Zooming into East Hampton’s Guild Hall celebration of his musical “The Producers” last night.

Starved for Broadway’s reopening, a happy crowd packed Guild Hall for an evening of clips and anecdotes about “The Producers,” the winner of the most Tony awards of any musical in history.

On a panel introduced by choreographer Susan Stroman, a winner of 5 Tonys herself, the show’s stars Nathan Lane, Matthew Broderick, and Brad Oscar quipped and reminisced about the play’s Chicago debut, and the run on Broadway, shut down for 3 days in the aftermath of 9/11, but then it was Rudy Guiliani who urged everyone to get back to work. People did not know whether it was appropriate to laugh, said Oscar. And of course, the show offered the audience a way to grieve less for a two-hour period, Stroman remembered. Nathan Lane performed, but scheduled for a vacation, he decided to take, joking, “If I cancel my vacation, the terrorists won.”

And so the evening went with Lane recounting his first encounter with Mel Brooks in a swimming pool at the Ritz in Paris. Anne Bancroft, finished with her swim, went up to her room, and Lane thought, Mel Brooks is in the pool with me instead of with Anne Bancroft. He also remembered that it was Harvey Weinstein, a backer at the time, who read the all-important New York Times review at the opening night party . . . “and then went off to pee in a flower pot” . . . conflating the producer’s crimes with another #Metoo accusee. Matthew Broderick remembered people coming to the door, every performance someone else would show up, Al Gore, for example. Lane said Clinton came, shook hands, but kept his eyes on Cady Huffman, the show’s splendid Ulla. But they were all in awe when Gene Wilder, the original Leopold Bloom, stopped by.

As if anyone needed to be reminded of how great this show is, clips of Mel Brooks recording his song “That Face,” telling how it was Anne Bancroft who encouraged him: “She was the angel on my shoulder,” and beaming at how wonderful Broderick was in that duet with Huffman. Or the incredible “Springtime for Hitler” number where Stroman’s choreography shines as the dancers do a swastika formation a la Busby Berkley. The showstoppers of the night were the live performances: first, Brad Oscar in his original Nazi helmet—“Every Jewish boy has to have Nazi paraphernalia,” he said. And then Lane and Broderick doing “Like Him,” sweetly renewing the Bialystock and Bloom friendship, their heads touching.

And then there was Mel himself looming over the John Drew Theater, zoomed in with failing audio but speaking and gesticulating nonetheless. He was God bestowing his blessings and love to an evening that could have gone on –for a few more hours at least.

Backstage, while everyone was considering which bar might still be open for a nightcap -— I think they settled on The Maidstone —- Broderick said his return to Broadway in the two-year delayed Plaza Suite would occur in February. That should give us enough time, right?