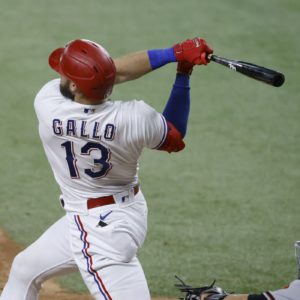 Joey Gallo is in the air, his spirit and his bat.

The Yankees just bought Joey Gallo from the Texas Rangers to be — fingers crossed — a superstar outfielder and hitter in the Bronx. He’s 27, and from Las Vegas.

But the real Joey Gallo was a terrifying gangster in the New York mob. He was brutally murdered at Umberto’s Clam House in Little Italy in 1972. His death came right around the time of “The Godfather” being released. The mob was very sexy and frightening then.

Bob Dylan must have been intrigued. He wrote a song called “Joey” with Jacques Levy, now deceased, released in 1975. “Desire” was a terrific album; Levy wrote a lot of the lyrics to many songs.

He pushed the table over to protect his family

Then he staggered out into the streets of Little Italy

The other songs co-authored by Levy are really great, including “Hurricane,” “Isis,” “Mozambique,” “Oh Sister,” “Romance in Durango,” and “Black Diamond Bay,” which appeared on the “Desire” album, plus “Catfish,” “Money Blues” and “Rita Mae.”

When Dylan sold the rights to his catalog last year for $300 million, Levy’s widow sued him looking for money on their 10 collaborations including “Joey.” Today, she lost the lawsuit. Jacques Levy apparently agreed back in ’75 that he waived all rights, he was work for hire. He gets royalties, always has and still will. But he is not an owner of the song with Dylan.

You could say Levy’s estate went to bat and got rubbed out.

PS Maybe the new Joey Gallo can have the song “Joey” played when he comes up to bat at Yankee Stadium: