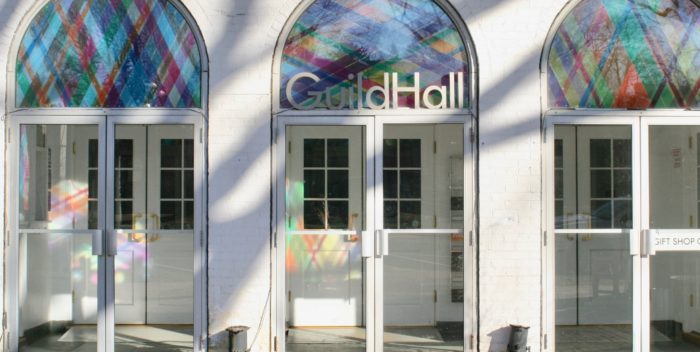 Begging the question: is it too soon to laugh about the pandemic year, 2020? A collection of short plays by masterful playwrights, did just that in a one-nighter at Guild Hall.

The pairings were perfect: In Rudnick’s “Play Bills,” Mizrahi camps his quarantine, imagining Hugh Jackman, Patti LuPone, Audra McDonald, Nathan Lane coming to his apartment to sing for him, a collision of Broadway talents vying to perform. Ruehl stole it in Jon Robin Baitz’ contribution, “All the Old Familiar Places,” as a woman desperate for contact, and vital Yves St. Laurent gloss, in an eternal loop with the pharmacy’s phone voice recording. Who could play that unseen role? Balaban, of course. Did the order go through? The pandemic may have pushed this woman over the brink, but this engagement with the automated world finished the job. Who among us has not suffered that?

The coup de grace came with Ben Shenkman’s stand-up in “Lenny T” by R. G. Masons: he and some buddies had been together for their standard golf group. One died in the early COVID sweep. The others tested positive, sickened, and survived, telling jokes and pondering subjects too taboo for merriment. You can joke about the Holocaust, for example, but not about Anne Frank. He tells a joke about the Holocaust. Everyone laughs. And sure enough, just as you think the sacred is safe, he lands the Anne Frank one: Just imagine if Anne Frank had social media, it would have changed her life.

Balaban’s worries about a disappointed audience were for naught: documentarians Chris Hegedus and Nancy Buirski were happy for a night out, and Laurie Anderson who would be conversing onstage the next day with Julian Schnabel attended—let’s just say, it felt like all was well at the John Drew Theater. A good time was had by all.