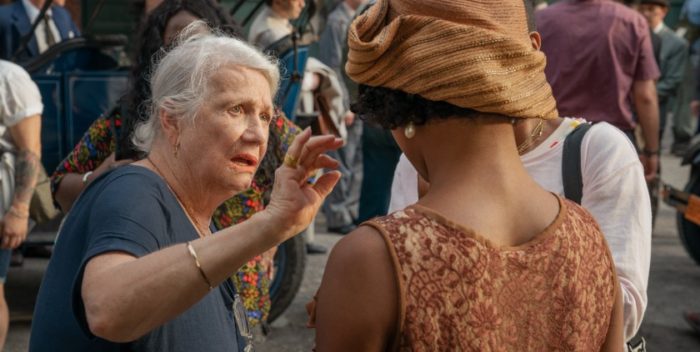 One could suspect from the way the Oscars were put together at LA’s Union Station, this was an unusual year. How do you dress for well, the imperative to simply show up? Some women took the Hollywood glam route: Amanda Seyfried’s red ball gown seemed from every camera angle to fill the room. Ditto for Angela Bassett’s pouf shoulders. Cleavage was a thing. And others rocked in covered up understatement: Olivia Coleman in demure Dior, Glenn Close dazzled in Armani Prive, even when she was wiggling her butt. The “Nomadland” women from multi-awarded Chloe Zhao to Frances McDormand whose wolf howl was the most musical note of the evening wore dour. Even the real-life nomads, like Swanky, so endearing and colorful in this desert toned movie, made up and coiffed, looked more dressed up.

But, had she attended, what would Ann Roth have said or worn collecting her umpteenth Oscar for costume design? A second-time winner at 89, like Anthony Hopkins at 83, she sat this one out. In 2012, Roth was honored for her work at the Hamptons International Film Festival. Here’s what I learned about her illustrious decades-long career:

Never ever confuse Ann Roth’s work with fashion. From the ensembles put together for Nathan Lane in “The Birdcage,” to the flimsy house dresses worn by Sally Field in “Places in the Heart,” to the spandex, crotch and derriere defining bell-bottoms worn by Pierce Brosnan, Stellan Skarsgard and Colin Firth in “Mamma Mia!,” these are costumes. “Oh, please!” she gasps if you suggest otherwise.

She did attend: Roth, smartly clad with cardigan draped over her shoulders, became straight-man to one of the most entertaining tributes ever, featuring anecdotes galore about Roth’s work, her attention to detail, her invented backstory for each character that defied the imagination of actors playing them. All this, so that the players could feel the parts, bringing award worthy performances.

As the late, beloved Mike Nichols put it, she collaborates on many aspects aside from costuming. She was responsible for Jane Fonda’s Klute haircut, that then became all the rage. For Nicole Kidman as Virginia Woolf in The Hours, Roth found a key to her look at a London cobbler’s shop when she was having a pair of shoes made. The craftsman said he had heard Woolf read on the radio as a boy and thought her sound had to do with her nose. Roth then suggested the infamous, transformative shnozz Kidman sported as the author of “Mrs. Dalloway.” Fonda and Kidman won the Best Actress Oscars for these roles.

But the 93rd Academy Awards eschewed the nonsense, and like the pandemic itself, made us all step up to what is necessary. While the academy honored the talent, featuring more inclusivity and diversity, the major change was women got more attention than ever. Accepting her Best Actress award, Frances McDormand noted her work is her sword. Or, as my daughter Jane observed about “Nomadland” director Chloe Zhao, she’s no B.S.