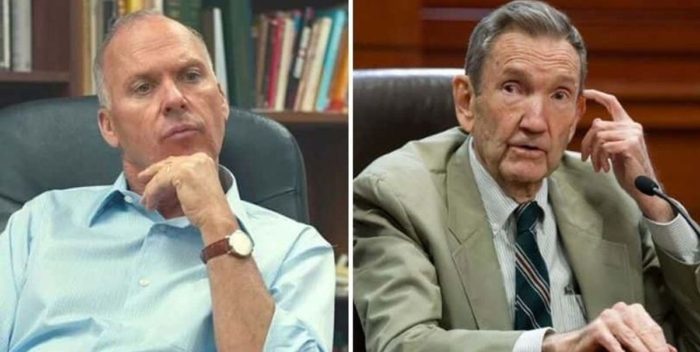 Ramsey Clark died on Saturday. He was 93, and famous for many things including being a former Attorney General under President Lyndon B. Johnson from 1965 to 1967.

Clark’s obits in the New York Times, Washington Post, Reuters, and AP are interesting for things that aren’t mentioned.

For one, he is currently portrayed by Michael Keaton in Aaron Sorkin’s movie “The Trial of the Chicago 7.” Ramsey testified in the 1970 trial, but not in front of the jury. Crazy judge Julius Hoffman woudn’t let him. Hoffman upheld the prosecution’s objections to 14 of Defense Attorney William Kunstler’s 38 questions to Clark, but Clark did testify that he had told the prosecutor Tom Foran to investigate the charges against the defendants through Justice Department lawyers “as is generally done in civil rights cases”, rather than through a grand jury.

You’d think that might seem important since the movie is nominated for an Oscar.

Clark also famously traveled to Hanoi in 1972, just as actress Jane Fonda did in a separate trip, to protest American involvement in the Vietnam war. It was a brave move on both their parts and brought them each massive amounts of criticism consequently. Still, they were proved to be right on all counts as the years passed and history acknowledged the U.S.’s mistakes in Vietnam.

Fonda, who has been scrubbed from the Clark obits, wrote eloquently about the trips on her blog in 2011. She said: “I became a target the government could use, to suggest that some POWs who had met with me while I was in Hanoi had been tortured into pretending they were anti-war. The same thing was done to try and frame former Attorney General Ramsey Clark, whose trip to North Vietnam followed mine.”

Who was the real Ramsey Clark? It’s going to take a lot more than reading the current obituaries to explain all that. I’m surprised by how they’ve been edited. What’s also interesting about Clark is this father. Tom Clark. was also Attorney General under Harry Truman for three years and was then appointed to the US Supreme Court. Tom Clark had to step down from the Supreme Court when Ramsey was appointed Attorney General. Many felt Tom Clark was very conservative on the Supreme Court. Ramsey Clark certainly went in the opposite direction of his father.