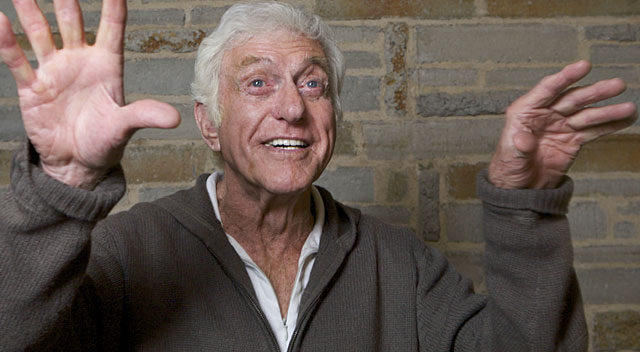 Dick van Dyke — one of the towering performers of our lives — is thrilled and surprised to receive a Kennedy Center honor this June. He’s only 95. (It should have been 20 years ago at least, but that’s another story.)

How is he, I ask, when I get him on the phone? I’ve wanted to do an interview with Dick van Dyke for a long time.

“I’m circling the drain,” he jokes. “I never thought I’d live this long. I don’t know how I did it.”

Except for a serious battle with alcoholism that he won years ago, van Dyke has survived literally by living well. It’s the best revenge. Reading his memoir, “My Lucky Life In and Out of Show Business,” you get the picture right away: a long first marriage, a long second relationship, a happy family, long friendships.

He tells me in a phone call that Chita Rivera, his co-star 60 years ago in “Bye Bye Birdie” on stage and screen, will give him the Kennedy Center prize. She’s only 88, a youngster.

I asked Dick about his recent splash in the news. He was seen in Malibu handing out cash at a community center. “This has been the hardest year,” he says. “I usually hand out coats. Sometimes I give out cash. This time, the paparazzi found me.” 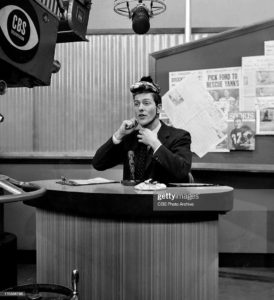 His acts of charity are usually not publicized. He’s always been a stealth liberal, not a flashy one. He supported Harry Truman, he tells me, because making the decision to bomb Japan was the hardest decision ever.  Even though he was and is a Democrat, he didn’t vote for Adlai Stevenson. He went with Eisenhower. “I voted for Ike. But from then on,” he says,” it was all Democrats down he line.” He supported Eugene McCarthy, and was with him in Los Angeles the night Bobby Kennedy was shot. More recently he backed Bernie Sanders.

His classic eponymous sitcom written and created by the late, great Carl Reiner, “The Dick van Dyke Show,” is back in reruns on MeTV. The show ran from 1961 to 1966. van Dyke says he wanted to keep going after 5 seasons, but Reiner wanted to stop. “I would have gladly done more,” he said. The show holds up now and is fresh as ever. van Dyke’s favorite episode is called “That’s My Boy,” in which is character, Rob Petrie, is convinced that the baby he and wife Laura — Mary Tyler Moore–bring home has been switched. The plot twist is that when the couple he thinks has their real baby comes to visit, they are Black. It was groundbreaking at the time.

“The network, CBS, didn’t want to do it,” van Dyke says. “We did a couple like that,” meaning socially progressive. I mention that the episode could be done now, it’s that timely. He says: “It’s also the funniest. We never had a laugh that was as long or deep as that.”

“The Dick van Dyke Show” seemed real to people also because it was set in a real New York suburb, New Rochelle. In his book, he said people named Petrie were friends of Reiner. Alas, van Dyke never met them. And he’s never been to New Rochelle. After the show hit, he lived mostly on the beach in Malibu or on a ranch in Arizona.

Though he once was praised by Fred Astaire for his dancing, van Dyke– a rubber band man on TV — never took a lesson. It just came naturally. He had a natural  grace and athleticism.. When legendary director Gower Champion hired him for “Birdie,” van Dyke told him he couldn’t dance. “Gower said, You’ll learn here.” van Dyke may have taught Champion a thing or two.

When I ran into van Dyke at the Golden Globes a couple of years ago, he’d just turned 93. He told me: “All of my friends are dead.” Basically, left now are Mel Brooks (94)  and Norman Lear (98). He and Brooks, he admits, never “hung out.” They knew each other through Reiner, who was the best friend of each of them. “I spoke to Mel the other day,” he said. “I was going through my phone book, and I called him up and said, You’re just about the only person I still know!” Dick tells me: “He’s writing a new book called All About Me.” 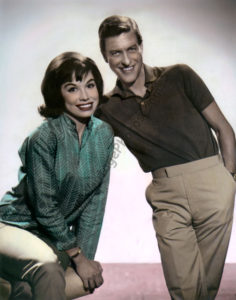 Of course, Mary Tyler Moore’s name came up. “When she started with us she hadn’t done comedy,” he said. “She took to it right away.” Back in those days, when there were few channels, their chemistry was so electric that people thought they were actually married. Even after the sitcom was over, they appeared in a hugely popular special together. That’s Moore got what turned out to be her own classic show. Dick and Mary remained friends until her death.

We also talked about Dick’s late brother, Jerry van Dyke, who tried for years to launch a career. He starred in “My Mother the Car,” which was supposed to be a hit but became a one season laughing stock. Jerry finally struck gold on the sitcom “Coach.” He was nominated for an Emmy Award four times. Back in the day he’d made memorable appearances on “Mary Tyler Moore” and on his brother’s show as banjo playing comic who sleep-walked. “We tried and tried to get a spin off for him, but it didn’t happen,” Dick says. “But eventually he did all right.”

van Dyke grew up in Danville, Illinois, where his childhood chums included others stars to be like entertainer Bobby Short, and song and dance man Donald O’Connor. One of his pals as Gene Hackman’s first cousin, Bob, although Gene was kind of a loner even then.

The sweetest part of van Dyke’s story is that after the book came out in 2011, and he was a widower after his partner of almost three decades, Michelle Triola, died, he found love again. He married Arlene Silver at the age of 86. She was 40. “We sing and laugh all the time,” he said. (His was married to his first wife, Margie, the mother of his four children, from 1948 to 1984.)

van Dyke is known for being a song and dance man, a leading man, a movie and TV star. But he was almost something else. For around a year in 1956, he co-hosted what was then The CBS Morning News with none other than Walter Cronkite. America’s Most Trusted News Man was involved in two or three shows at the time. Dick was doing feature stories. “One day I had an Alaskan sled in with the dogs and the driver and they turned the studio over!” 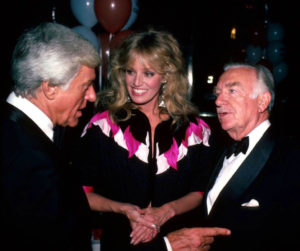 Cronkite, he recalls, has a good sense of humor. “Supposedly,” Dick says, “he was famous for doing a great strip tease.” Eventually, the network decided Walter was overworked and took him off the show. Charles Collingwood replaced him. Dick says, “Walter really called me and said ‘What did I do wrong?’ He thought I got him fired. I said, I didn’t have any kind of power like that.’

The two were not much in touch after that, but when van Dyke hit it big with the Reiner show, Walter sent him a photo of the two of them. “He wrote, How did you ever make it without me?”

Dick had his share of great leading ladies once his career took off, from Chita Rivera to Mary Tyler Moore to Julie Andrews. He wanted to work with Blythe Danner, he says in a 1982 Showtime version of Clifford Odets’ “The Country Girl.” But the studio wanted Oscar winner Faye Dunaway for her first project after the disastrous “Mommie Dearest.” It was a disaster. “She was the worst person I ever worked with,” he said. “Six months after we were finished she insisted on re-shooting a scene and I had to fly back to New York to do it.” In our two conversations it’s the only negative thing I heard him say about anyone.

Now Dick waits for the Kennedy Center taping, which will be virtual. “All I have to do is stay alive until then,” he tells me, laughing. How will he do it? “We’ll just keep on doing what we’re doing,” he says.