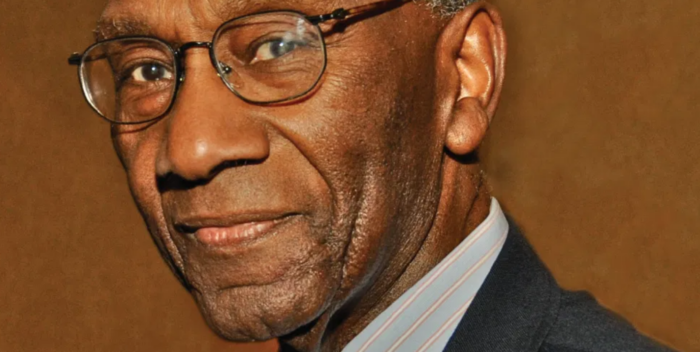 That was Franklin Thomas, who’s 86 years old and very much alive. He must have watched tonight’s segment and thought, “What am I? Chopped liver.” Thomas ran the Ford Foundation from 1979 to 1996. I never knew him, but I friends who worked for him and he was very highly regarded.

Here’s just the beginning of his bio from Wikipedia: “Franklin Augustine Thomas was born on May 27, 1934 in the Bedford-Stuyvesant neighborhood of Brooklyn. After the death of his father, his mother, Viola, an immigrant from Barbados, headed the household where he was the youngest of six children as a housekeeper and waitress. He attended the Franklin K. Lane High School. Thomas graduated from Columbia College in 1956, where he was a star basketball player and the first African-American captain of an Ivy League team. He later graduated from the Columbia Law School 1963 after a stint in the Air Force.”

Thomas was also quite the ladies’ man, and with brand name ladies. He had a thing with Gloria Steinem in the early 70s, then married FDR’s granddaughter. Now that’s a success story!

Any, if Mr. Thomas reads this, he should know he hasn’t been forgotten. Lesley made Darren Walker seem like a pioneer. I’m sure in some way he is, but Franklin Walker was first! He once said, “One day our descendants will think it incredible that we paid so much attention to things like the amount of melanin in our skin or the shape of our eyes or our gender instead of the unique identities of each of us as complex human beings.”

I’m not sure how Thomas was left out of the story, by the way. It turns out the big boardroom at the Ford Foundation is named for him.