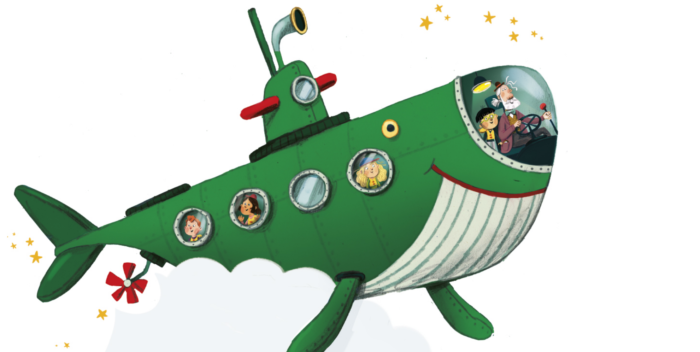 Paul McCartney does not stand still, or even sit down, at age 78 (and 79 coming in June).

Of course, Paul is famously associated with a Yellow Submarine of long ago.

This Sub is Green, however, and may run on something other than fossil fuels.

That’s not all Paul is doing. Next month comes “McCartney III Reimagined,” with a bunch of recording artists covering songs from Paul’s acclaimed “McCartney III” album which was released in December 2020.

In August, of course, we get the “Let it Be” 50 th anniversary project one year late in the form of Peter Jackson’s “Get Back” documentary and maybe some kind of album to go along with it.

Oh yeah, and Paul is still working on the Broadway musical of “It’s a Wonderful Life” for 2022.

As for the book, Paul says on his website:

“I’m really happy with how ‘Hey Grandude!’ was received as this was a very personal story for me, celebrating Grandudes everywhere and their relationships and adventures with their grandchildren. I love that it has become a book read to grandkids at bedtime all around the world. I always said if people liked the first book and there was an appetite for more I would write some further adventures for Grandude – so he’s back and this time with his special invention, Grandude’s green submarine!”