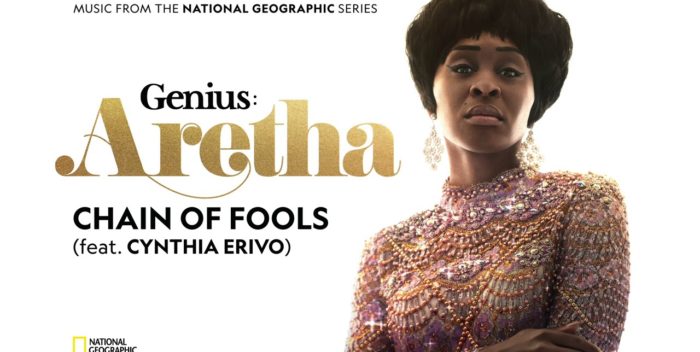 “Genius: Aretha” debuts Sunday night a two hour special at 9pm on National Geographic, and then continues on for the next three nights in two hour installments. I’ve seen all but the last hour and I’ve held off writing about it until now.

As many readers here know, Aretha Franklin was my friend. Or, I was lucky to be her friend for many, many years. She always wanted a movie to be made about her life but was nervous about it. A lot of Aretha was hidden from her closest friends and family. She was very private.

Some of that comes across in Cynthia Erivo’s performance. The Tony winning, Oscar nominated actress has a gorgeous voice, and while she doesn’t imitate Aretha, she does her best to emulate her in that regard. Unfortunately, “Genius” does not include many of Aretha’s greatest hits from the Atlantic Records era, like “Respect,” because the Jennifer Hudson movie of the same name locked them up in advance.

That leaves “Genius” to at least show who Aretha was, to somehow scale the wall Aretha kept up in real life to protect against a great deal of pain. Erivo tries very hard to get there. She has a look of hurt in her eyes that I found haunting, and conveyed so much of what Aretha hid from all of us and all the people she knew long before I met her. Between Erivo’s voice, and this one angle she invests into the character, I give her props.

But the real Aretha story is not told here. I don’t know if it will ever be told. For one thing, too many people are alive who could be hurt by a serious investigation. Why do that to them? So some things are alluded to, but no points are made in “Genius.” What we’re getting is writer Suzan Lori Parks doing her best to suggest issues in Aretha’s life while just putting together scenes from public information. What lies beneath stays there.

On the down side, a lot of “imagined” scenes I found hard to swallow. Aretha and Martin Luther King didn’t chit chat about their personal problems in real life. Aretha would never ever have handed out flyers at a public rally, nor did she make a public speech about George Jackson. That simply wasn’t her style, but Parks had to find dramatic beats, so she invented them.

Even when there were chances to delve into something deeper, Parks is at a loss. Almost an entire episode re-creates Aretha’s filmed gospel concert in Los Angeles that became the documentary “Amazing Grace.” Aretha didn’t want that film released, and did everything to block it. Then it was released last year, and now it’s been replicated in another film. I can only imagine Aretha in her after life is furious. And trust me, we discussed “Amazing Grace” a lot. She did not want it out. Period.

Back to the music: Director Anthony Hemingway and Erivo do the best they can with what they have to work with. Lacking access to the hits, “Son of a Preacher Man”– which was Dusty Springfield’s song– is now important. That’s ridiculous. The filmmakers did get “Don’t Play That Song For Me,” which was written by Ahmet Ertegun, the head of Atlantic Records. But Ertegun is entirely absent from this mini-series, which is infuriating. Producer Jerry Wexler’s relationship with Aretha (David Cross plays him) is not right at all, they were friends. Producer Tom Dowd is almost completely absent, too.

But Erivo shines no matter what she does. Courtney B. Vance is so strong that his performance as an ambivalent Reverend CL Franklin works, to a point. There’s a concocted frisson between Aretha and one of her sisters, all made up and not right–Carolyn Franklin wrote a lot of Aretha’s hits, but because they couldn’t be used, none of that is explained. Also, Cissy Houston and the Sweet Inspirations sang back up and toured with Aretha during this period; they’ve been largely brushed off.

My favorite sequence was the episode in which Barbara Franklin, CL’s wife, is banished from the household and moves to Buffalo. Antonique Smith really makes Barbara into a sympathetic character. Malcolm Barrett tries to do something with Aretha’s famously villainous husband Ted White, but I think constraints prevented the full story to be told. Ted White, unlike Ike Turner, is still alive.

The real winner in the “Genius Aretha” mini-series is 14 year old actress Sanai Victoria. She’s got a great voice, and carries a substantial part of the miniseries with grace and humor. (Erivo’s Aretha rarely smiles, by comparison.) Young Aretha lives through many ordeals, some of which are left opaque here, but Victoria does her level best to make us feel as if we are watching a Queen earn her crown.

Will the Jennifer Hudson movie be any better when it arrives in August? I hope so. Think of this miniseries as the origin story for “Respect,” watch them both, then listen to Aretha’s records. They remain, and will always stand the test of time.

PS On an administrative note, NatGeo must clean up the mess documenting this miniseries both on the IMDB and Rotten Tomatoes. On the former, all three “Genius” series are lumped together, the credits are a jumble. On Rotten Tomatoes, you cannot search for this title. It’s not there.