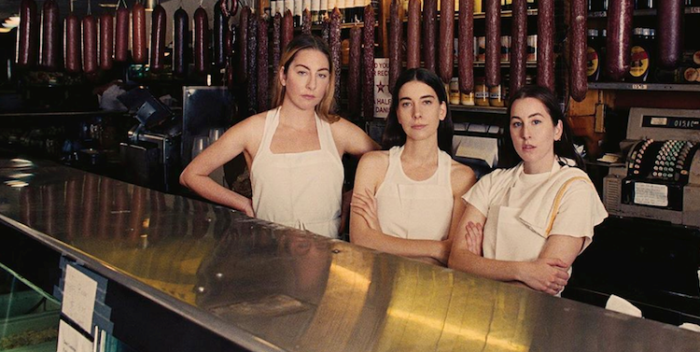 Haim– pronounced Hay-em– will make their debut on the Grammy Awards Sunday night. They are three nice Jewish girls from Los Angeles whose first gig was at Canter’s delicatessen in the Fairfax district.

Between servings of matzoh ball soup and lean pastrami, the Haim sisters — Danielle, Este, Alana – became stars. They opened for Taylor Swift in 2015 on her “1989” tour and became BFFs.

That same year they were nominated for Best New Artist, but lost. And they didn’t perform on the Grammys.

Think of them as the Kosher Roches.

Sunday night they are suddenly nominated for Album of the Year with their third album, “Women in Music, Part III.”  And their track, “The Steps,” is nominated for Best Rock Performance.

Their dad, Mordechai, was an Israeli soccer player who moved to Los Angeles with their mother, Donna, a “Gong Show” winner from Philadelphia. They went into real estate, but the father’s real love was fronting a rock band.

Last July, on a “deli tour,” Haim was featured in The New Yorker.

Their Album of the Year nomination certainly came out of left field. “Women in Music, Part III” has sold just 32,000 copies according to Buzz Angle/Alpha Data Music since its release last July. With streaming of singles, the total is still a subtle 84,500. They aren’t big radio stars either. And they are now on the “older” side of pop music, in their 30s.

“The Steps” hasn’t even been their biggest hit from “Women in Music, Part III.” That would be “Gasoline,” featuring, natch, Taylor Swift, who will likely win a raft of awards on Sunday night. But a rising tide lifts all boats, and Swift’s is no doubt helping Haim. The question is, does Swift like a little shmaltz?