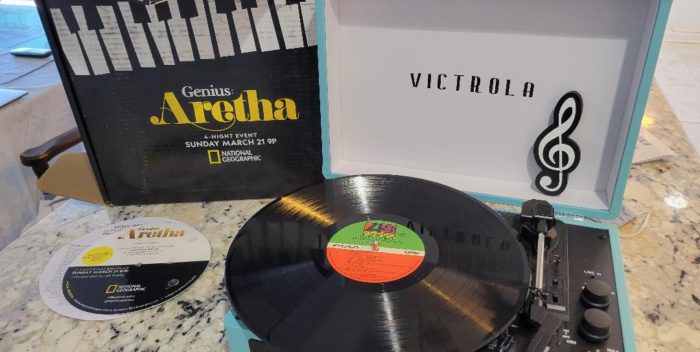 As my grandmother used to say, You can’t beat this with a stick.

National Geographic TV win the prize for Best Promo ever. They’ve sent out a record player to promote “Genius: Aretha” which begins March 21st on their channel for 4 nights.

Cynthia Erivo is amazing as Aretha, and Courtney B. Vance is outstanding as her father, Reverend CL Franklin. There are many terrific performances. The music is over the top good.

But look at this thing: a Victrola, with bluetooth, and audio outputs. All customized for Aretha. The package comes with a coffeetable book and an LP from Atlantic Records of “Aretha’s Greatest Hits.” I just played it. The sound is wonderful.

We all Victrola’s back in the day. I didn’t realize they were a company. They have beautiful record players, etc on their website. Maybe their rep will email me at showbiz411@gmail.com. Once you see these things, you will be ready to buy one.

I hope Nat Geo or someone will make this package available for Aretha fans. It’s quite the souvenir. But I’m not surprised since Clive Davis was involved in it.

And Aretha on vinyl! What a sound! But you will not be disappointed by Erivo’s versions when you hear them. Aretha would be impressed.