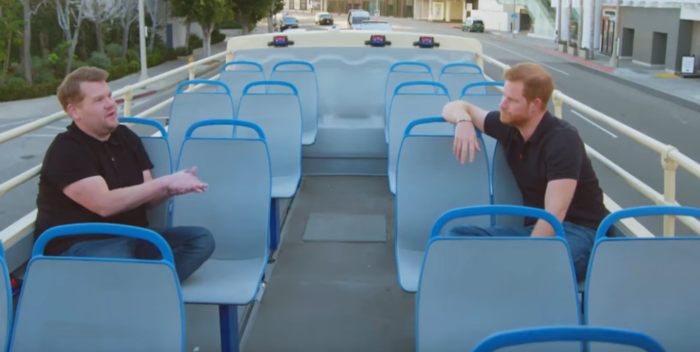 They ride on an open air tour bus and Harry admits he’s never been on one. He tells Corden that he will never walk away from his family in the UK but had to leave London and the press because “it was destroying my mental health.”

The whole piece is so candid, relaxed, and funny it’s mind blowing. Harry says he likes “The Crown” and is more comfortable watching than reading the stories made up about him in the press.

Harry and Corden also tackle a military obstacle course for real. Harry turns out to be super fit. Corden doesn’t do too badly, all things considered.

Their whole conversation, including Harry revealing that Queen Elizabeth sent them a waffle maker for Christmas, is brilliant. And Prince Philip “my grandfather” knows how to use Zoom but ends conversations just by closing the computer.

This is as good as Corden and Winston’s Paul McCartney special. An Emmy winner for sure.

PS Don’t miss the part where they visit the mansion from “The Fresh Prince of Bel Air.” Harry raps the theme song and uses the bathroom. Genius.