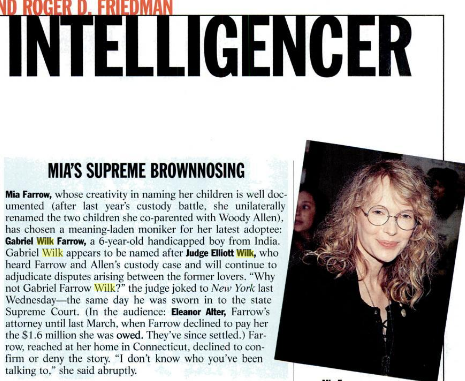 Back in January 1995 I reported this for New York magazine’s Intelligencer. Mia Farrow, fresh from her custody trial with Woody Allen, adopted yet another kid. This was a special needs child whom she named Gabriel Wilk Farrow. The Wilk was a tribute to the judge in the custody case with Woody Allen, named Elliot Wilk. (He died in 2002.)

When I called the judge to ask what he thought about it, he replied, “Why not call him Gabriel Farrow Wilk?” Mind you, this was the judge still dealing with custody issues between Woody and Mia, but Mia sucked right up to him and he loved it. Last year, Woody recalled in his memoir how photographer Lynn Goldsmith told him Wilk once came to her house, drunk, and tried to sleep with her.

Mia changed Gabriel’s name to Thaddeus, but kept the Wilk. The sad part is that in 2016, Thaddeus Wilk Farrow committed suicide. He was one of three of Mia’s adopted children who died, two of them suicides. Thaddeus, who was paralyzed from polio, was found in his car suffering from a life threatening injury along Route 67 in Roxbury, Connecticut– not far from his own apartment and Mia’s Bridgewater farm.