UPDATE: the men of the latest season have spoken out now too: 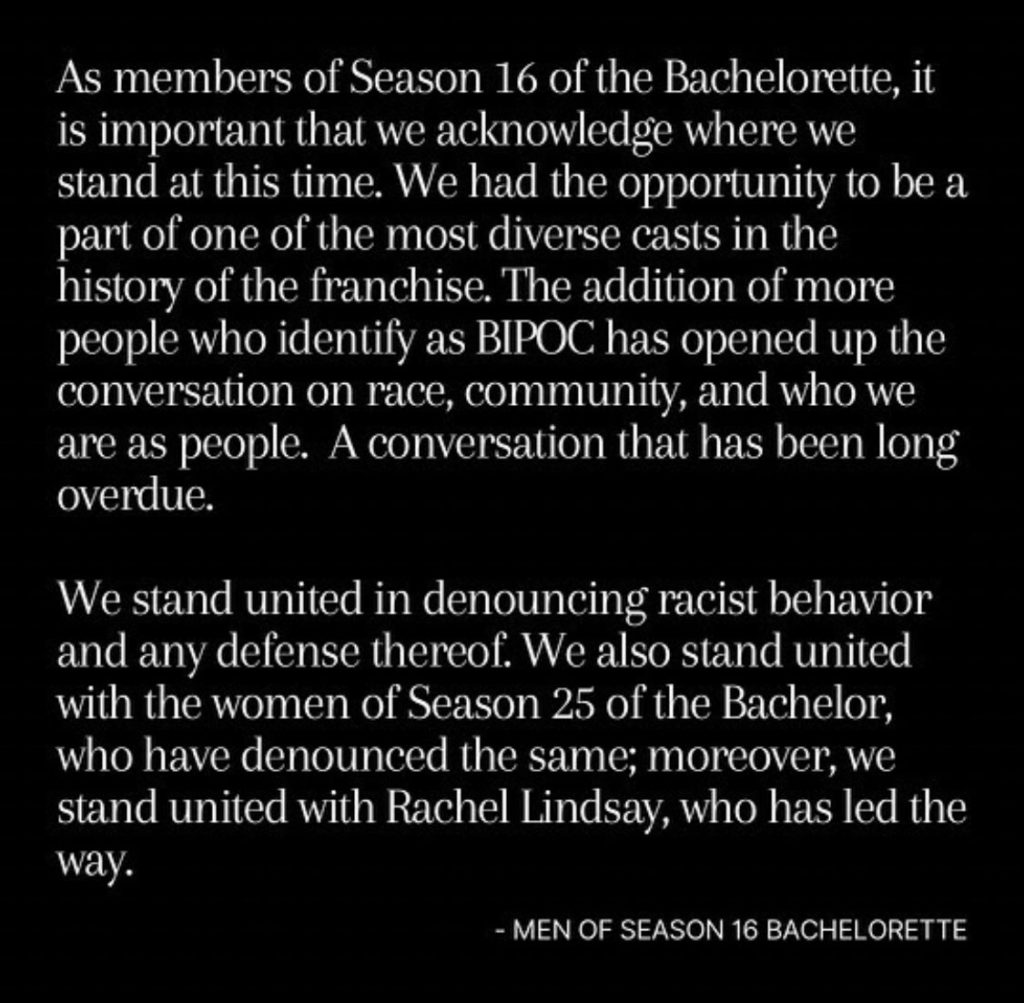 The TV kabal known as “Bachelor Nation” is imploding, and it’s over race, of all things. After one white season after another, Rachel Lindsay — a lawyer who was about 10 times smarter and better educated than previous contestants — became the first Black Bachelorette. Instead of returning to her old life when the show was over, Lindsay– articulate, smart, and attractive — saw she could have a broadcasting career. She took a job with “Extra.” I met her a few weeks ago on a Zoom call with other press for a Q&A about a movie, and was so impressed.

But everything’s come around for Lindsay. When a white “Bachelor” contestant this season named Raechel Kirkconnell was revealed to have a racist past, it was Lindsay who had to interview the show’s host, Chris Harrison, for “Extra.” At issue was a photo of Kirkconnell from a sorority party at a former Southern plantation, dressed as an Antebellum Belle of the Ball.

Lindsay wasn’t having it. At one point she says to Harrison, “If I went to that party, what would I represent at that party?” It was the question of a prosecutor.

Harrison’s answer, as you can see in the video, was shockingly stupid. Since this party took place in 2018, he indicated that it would have been alright then– two years ago!

Harrison has quickly backtracked. He’s “apologized” on Instagram for saying something so stupid. “To my Bachelor Nation family—I will always own a mistake when I make one, so I am here to extend a sincere apology,” Harrison wrote on Instagram. “I have this incredible platform to speak about love, and yesterday I took a stance on topics about which I should have been better informed.”

The women of “The Bachelor” aren’t accepting it.

“We are the women of Bachelor Season 25,” the contestants wrote back on Instagram. “Twenty-five women who identify as BIPOC were cast on this historic season that was meant to represent change. We are deeply disappointed and want to make it clear that we denounce any defense of racism. Any defense of racist behavior denies the lived and continued experiences of BIPOC individuals. These experiences are not to be exploited or tokenized. Rachel Lindsay continues to advocate with ‘grace’ for individuals who identify as BIPOC within this franchise,” the statement concludes. “Just because she is speaking the loudest, doesn’t mean she is alone. We stand with her, we hear her, and we advocate for change alongside her.”

Lindsay has now emerged as the voice of reason for “Bachelor Nation” and “Extra.” She’s kept mum in response only to post this wide adage to her own Instagram: “God grant me the serenity to accept the things I cannot change, Courage to change the things I can, and Wisdom to know the difference.”

Meantime, the first Black Bachelor, Matt James, rolls toward the conclusion of his series. Did he find love? Was he just repelled by all of these people? For the first time, the answer may matter. I’d like to see him just wash his hands of the whole thing and walk away.