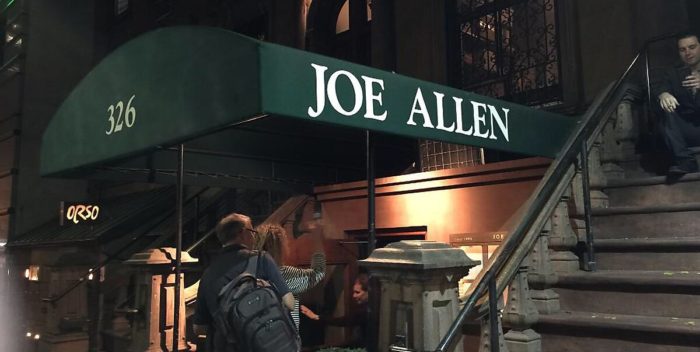 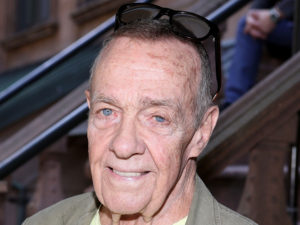 Joe Allen was no Elaine Kaufman. He wasn’t sitting in his eatery on West 46th St. every night, entertaining and hosting the crowd. Sometimes he was at the bar. Meanwhile, everyone in the place after 10pm was from a Broadway show. You often made it over after a show was done to find an actor from that very show entertaining guests from out of town or having a drink from another play.

Joe Allen should be on the front page of tomorrow’s New York Times. Their people certainly ate at Joe’s tables for decades beginning in 1965. There was no Restaurant Row before Joe Allen, but since then the block between Eighth and Ninth Avenue has flourished with all kinds of hotspots.But if you wanted a beer and a burger or a pot pie or a salad in a comfy setting, you tried to get a reservation at Joe’s place.

In 1983, Joe went upscale and introduced Orso just to the left of his namesake pavilion. I can tell you that Orso was so “hot” and impossible to get into people fought for the tables. That heat went on for a decade. It was one of “the” places to go at lunch time, and definitely desired after theater. Orso was the complete opposite of the mother ship. Italian, hip, expensive. Actors only went there if someone was taking them.

In that time, Joe Allen also expanded to Los Angeles and London. For a while the Hollywood crowd was all over it. I think it was just too hard for Joe to keep up at a 3,000 mile difference, but I remember in the mid 80s when I’d get to L.A. and someone would say “Let’s go to Joe Allen,” because they thought I had an in from New York. It was either Joe Allen or Spago.

Eventually Joe went above the street level of West 46th St. adding Bar Centrale. It was really for after hours, with just tapas and drinks, no coffee or dessert. and no way to get in. That’s because the Big Name actors would go up there after seeing friends backstage.

Joe was not around much, and I often saw him up at Elaine’s, a million miles away at Second Ave and 88th St. He and Elaine started their places around the same time and they were far enough away from each other to divide up the celebrities and A-listers and still enjoy each other. When Fred Rappoport and I produced Elaine’s memorial service in 2011, Joe was one of the honored speakers.

There will be a lot of tributes to Joe online tonight. The great actress Holland Taylor wrote on Twitter: “Joe Allen NYC and ORSO fed and hosted me and mine my entire career; for a long time divine in LA; always HAFH in London; and then— the total *perfection* of Bar Centrale. RIP, Joe. You were truly one of the good guys.” Chita Rivera: “There’s only one #JoeAllen… Strong, Steady, Comforting and Reliable. He certainly will be missed but we will carry him with us forever. I know I shall.”

There isn’t an actor, director, writer, or journalist, or any of the other people connected to Broadway shows who hasn’t been fed by Joe Allen. They loved looking at the decor, which consisted of framed posters of shows that closed right away. We’d come in after seeing a turkey and say, Their poster should be up here tomorrow.

In the months right before the pandemic, the restaurants had some plumbing issues, causing a limited menu. But everything was eventually sorted out. Unlike Elaine’s, Joe Allen was set up as a business. There will be no skulduggery with the owner gone. When Broadway returns, so will the trio of eateries that are the heart of the theater district. And we will toast Joe in every one of them, and thank him profusely for giving us the sustenance to sit through six hours shows, musicals that have no songs, and the joyous successes that make us feel alive again.

Thank you, Joe Allen, for everything.