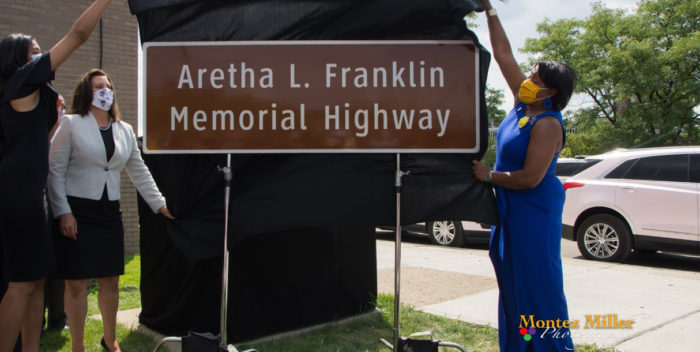 Sirius XM has added four channels to their service and now I will never leave the car!

The Motown channel is a take over– I hope temporarily– of my favorite channel, Soul Town, 49.

Aretha’s channel is on Sirius app right now, and will move to the radio with its own channel soon, I’m told.

Jimi Hendrix and Miles Davis can certainly support their own channels. Check the Sirius website for more information. There’s also a free preview.

I’m already addicted to Sirius, and now that’s it. In addition to these channels, I always recommend Little Steven’s Underground Radio, the Beatles channel, 1st Wave, Siriusly Sinatra, and the talk entertainment channels up around 104 or so run by Roger Coletti.

But right now I have to run. “Rock Steady” is playing!

Friday night in Manhattan, at the smallest venue she’s played in probably 30 or more years, Aretha Franklin made history.

Like James Brown at the Apollo and Sam Cooke at the Copa, Miss Franklin, Queen of Soul, perhaps the greatest performer who can mix R&B, soul, blues and opera, took over B.B. King‘s in Times Square, sold the place out to the rafters and delivered a spine-tingling 95 minutes that no one in the place will ever forget for the rest of their lives.

It was the kind of show in which a waiter trying quietly to take drink orders in the front rows actually stopped his work for a moment and started clapping wildly. Aretha, only a few feet away, had overpowered him.

It was a hot night in B.B. King’s, too, because Franklin insisted on keeping the air conditioning off in order to protect her golden throat. The crowd, which came in en masse around 7:30, had already started fanning themselves during an unexpectedly fine set by Franklin’s son, Teddy Richards, who bravely accompanied himself on electric guitar through several otherwise unornamented numbers. With a voice that falls between Terence Trent D’Arby and Lenny Kravitz, and catchy songs full of potential for bigger orchestration, it was kind of a shock that he didn’t already have his own big career.

But then it was time for Aretha. The ticket prices ran from $150 for standing to $450 for the best seats in the house, with no “comps.” This meant also no celebrities (they don’t like to pay), but Franklin did introduce old comrades like Atlantic Records co-founder Ahmet Ertegun and famed music publisher Allen Klein, who controls the rights to the early Rolling Stones hits and the songs of Sam Cooke.

This may be the only report you read of this show, since there was no press to speak of and only two photographers, one from Corbis and the other hired by Aretha’s publicist. This stealth show had been rescheduled from April, with some thinking it might never happen.

It did, though, as Franklin, dressed in a bejeweled, flowing lemon yellow-colored caftan and sporting a hair cut with bangs and a flip, came to occupy the stage. She placed a rather large beige Louis Vuitton pocketbook under the baby grand piano, picked up the mike and warmed up her voice with a pair of standards including “I Want to Be Happy” and “Skylark,” the latter featuring a protracted scat call just to show she wasn’t fooling around. She dedicated the song to Bob Mersey, her first producer at Columbia Records in her pre-Atlantic days.

And then the gloves, as they say, were off. She slammed through the rarely heard “Jump to It,” her 1980 comeback single for Clive Davis; a moving rendition of “Have You Ever Been in Love”; and a breezy version of her signature, “Respect,” getting the big hit out of the way for more important things. At this point she was drenched in sweat.

“There’s no Kleenex or handkerchief up here?” she asked rhetorically. “A lady is supposed to have one in her pocketbook.” A fan quickly handed up a linen hanky, and Franklin patted her face.

She introduced Ertegun, and said, getting her bearings, “I’m having a senior moment.” She laughed. “No, I’m not,” she said, adding, “I hope my top is intact, but if it’s not, just imagine it.”

She was referring to her voice, not her bosom, though, and launched into the first of two Puccini arias, “O Mio Babbino Caro,” to which she added a gospel flavor. During a real gospel number, “Holding On to My Faith,” Miss Aretha boogied across the stage, dancing with abandon like it was 1968. She was so swept up by the energy that she sighed, “Alright,” and laughed when the song was over.

“If you want to hear your music played correctly,” she announced with glee, “give it to New York musicians.”

Her own musicians — son Teddy, Richard Gibbs on piano, Darryl Houston, et al, as well as the four New York horn players — did not let her down.

With Michelle Ponder, one of three backup singers, Franklin then turned out a classic she rarely performs, “Ain’t No Way,” written by her sister Carolyn, with Ponder ably providing the counterpoint that Cissy Houston is famous for on the original recording. Of all the songs from her legendary Atlantic catalog, it’s Aretha’s most transcendent. She raised the hairs on the backs of every neck.

“What else do you want to hear?” she asked the audience. There were shouts for “Until You Come Back to Me,” “Think” and “Jimmy Lee.”

“Jimmy Lee?” she responded. “I’m finished with him.”

Instead she sat down at the piano, giving Gibbs a rest, and fell into what can only be called a trance state of delight as she delivered her own composition, “So Damn Happy,” plus an extended bluesy version of “Dr. Feelgood,” and Sam Cooke’s “You Send Me,” the last rendered in the style of Natalie Cole‘s “This Will Be.”

There is almost nothing in the world to compare to watching Aretha Franklin on the piano. She is rarely cited as a musician, but she is actually a virtuoso, with an innate sense of timing and intonation on the keys. For a big woman, her touch is forceful but light. She actually looks like she’s driving the piano as if it were a Bentley through an obstacle course of twists and turns. Her joy is immeasurable.

And then: “We’re going back to the Grammys,” she said, returning to the mike. Several years ago Aretha had to perform Puccini’s “Nessun Dorma” from the opera “Turandot” live on the stage of Radio City Music Hall when Luciano Pavarotti refused to come down from his dressing room and join her, as planned. (He was being petulant in general, not specifically about her.) The joint went wild when she was done, and the aria has since become another unlikely trademark. At B.B. King’s, this was the number that forced the waiter to put down his pad and begin cheering wildly as Franklin completed the strenuous exercise of beauty.

A fan yelled out a request when the applause subsided. “What a Difference a Day Makes!”

“I’m telling you,” Aretha said, shaking her head, and wiping sweat from her eyes. It was about 100 degrees on stage. “Tomorrow I’ll be horizontal!”

She finished then with “Make Them Hear You,” a song about the civil rights movement from the musical “Ragtime” that she’s never recorded, but should as soon as possible. (It’s so moving, I’d be surprised if the Democratic National Convention doesn’t ask her to sing this for them in Boston.) Like Cooke’s “A Change Is Gonna Come,” this is a swooping, unsentimental anthem, with none of the fakery of a Diane Warren faux lament, but some very real emotions that Aretha — who marched with Dr. King — obviously feels down deep.

And what about the voice? So many people have asked me about it since Friday night. Can she still sing? Has her weight affected her voice? I’m telling you now, the answers are yes to the first and no to the second. Her voice is richer and deeper now, but her range is unaffected by time. On Friday night, sitting literally against a small speaker, I got to hear the real unadorned Aretha. Every bit of her textured, soothing contralto blossomed like a slowly opening rose.

When it was over, she moseyed off the stage. Would there be an encore? One of her assistants ran on stage and grabbed the Louis Vuitton bag from under the piano. That was it. Some people paid more than $100 a minute to hear Aretha Franklin sing on Friday night. I didn’t hear one of them complain when the show was over. All you saw were smiles.

Backstage, the Queen of Soul accepted a lucky few into her tiny dressing room, heated like a sauna about 20 degrees warmer than the stage. “I’m singing the national anthem in Times Square tomorrow,” said the living legend, “then I’m on vacation in Southampton.”

She took pictures with some fans, hugged Ertegun and then disappeared into the night, her legend intact.