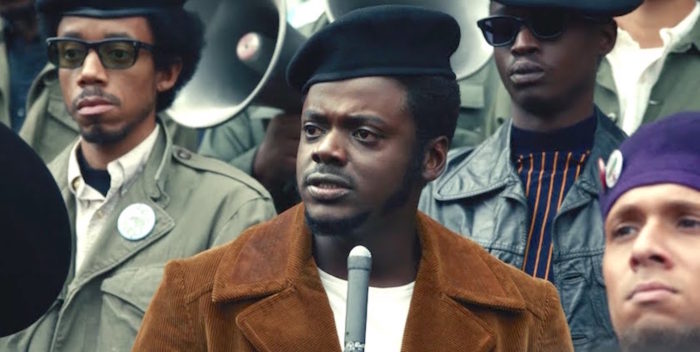 If you’ve already seen Aaron Sorkin’s excellent “Trial of the Chicago 7” on Netflix you know that early on, Fred Hampton– head of the Chicago Black Panthers– is killed after being of help to the men on trial. In this movie, Hampton is played by Kelvin Harrison, and you immediately miss him.

In Shaka King’s “Judas and the Black Messiah,” also excellent, we hear the adjunct story of Hampton and what led to his murder. Daniel Kaluuya, who made a splash in “Get Out,” is phenomenal as Hampton, the so-called Black Messiah. But he’s brought down, in a true enough story, by William O’Neal, a police informant who’s sympathetic to the cause but primarily interested in his own survival. LaKeith Stanfield is riveting as O’Neal, who the audience struggles to like.

With these two actors leading the story, we have an abundance of riches. Since everyone is focused now on awards season, I’d put Kaluuya in lead and Stanfield in supporting. They give two exceptional performances.

But there’s more at stake here than awards season. What we’re seeing is the dismantling of J. Edgar Hoover, the corrupt head of the corrupt FBI who used his power to try and destroy Black people and the civil rights movement. Racist doesn’t begin to describe him. Hoover’s already had many movies made about him, and he’s always a villain. But Martin Sheen, with a lot of prosthetic makeup, does his best to convey Hoover’s evil as he dogs the Panthers, especially Hampton, literally to death.

Aiding Hoover is FBI agent Roy Mitchell, who turns O’Neal and is proud of it. Mitchell is a villain, too, make no mistake, but Plemons– in his second terrific turn of the season (see “I’m Thinking of Ending Things”) makes Mitchell unexpectedly palatable.

“Judas”and “The Trial of the Chicago 7” are must see films now, especially for young people, in light of current politics, Black Lives Matter, and so on. This all happened in 1969, and not much has changed. That’s really what’s frightening.