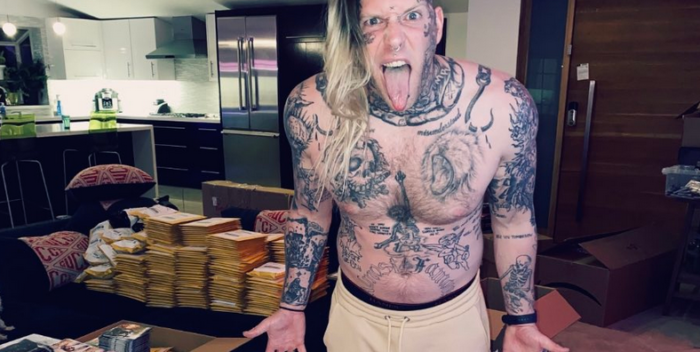 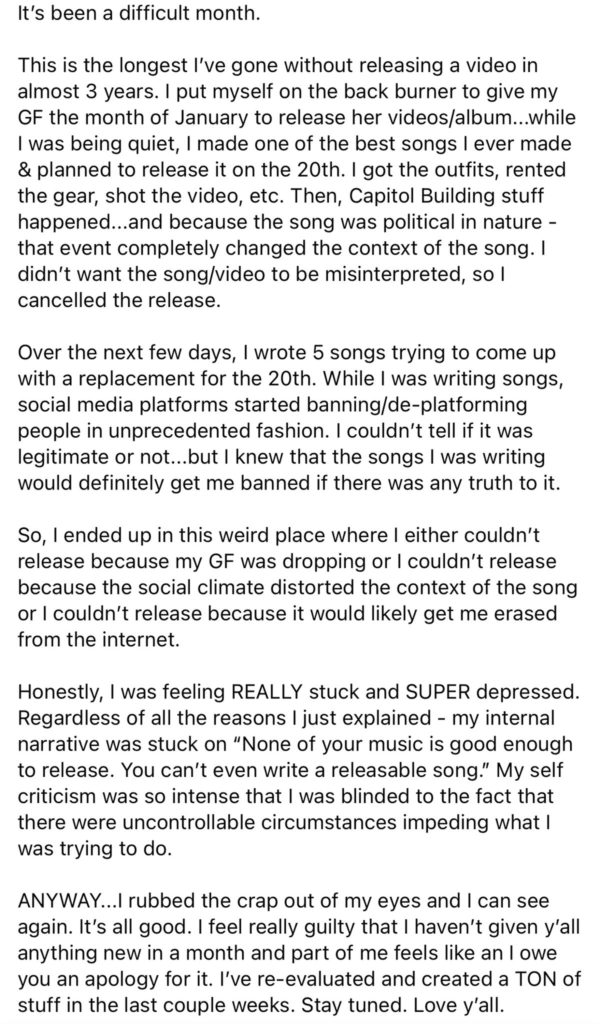 The song attacks feminism, Black Lives Matter, Cardi B, criticizes Eminem for maturing, and goes after cancel culture (Cancel culture runs the world now, the planet went crazy/
Label everything we say as homophobic or racist)

On Friday and Saturday, “Fake Woke” sold 8,000 copies, half of them streaming. The video on You Tube has 2 million views. “Fake Woke” is dangerously stupid. But it’s a sign of what’s lurking in plain sight. I’m assuming there will be no radio play, even if to make fun of it. That’s how you normalize.

McDonald’s statement of purpose, I guess you might say, is included here from his social media.

An Australian student website called  Honi Soit, wrote: “MacDonald is insistent, however, that he is not racist and has not participated in ‘racist activities’, which he mostly boils down to “owning a slave” or saying a racial slur. “You’re making me the villain by demonizing my race,” he effectively screams in the song’s third verse. He presents an incredibly outdated and one-dimensional view of racism. MacDonald seems to be more concerned with defending white people from online-degradation than legitimate systemic racism.”

There’s no label involved. MacDonald just uploaded “Fake Woke” to iTunes and YouTube. But he’s managed to find 8,000 customers. That should worry everyone. MacDonald has 10 songs streaming on Spotify including one, “Everybody Hates Me,” that has 20 million streams. Other titles include “White Boy” and “No Lives Matter.” So far, “Fake Woke” hasn’t registered on Spotify or on Apple Music.

I think it’s crazy I’m the one who they labeled as controversial
And Cardi B is the role model for twelve year old girls
There’s rappers pushing Xanax at the top of the Billboard
But if I mention race in a song I’m scared I’ll get killed for it
It’s backwards, it’s getting exponentially dumb
It’s more difficult to get a job than purchase a gun
Eminem used to gay bash and murder his mom
And now he doesn’t want fans if they voted for Trump
We’re ashamed to be American, you should probably love it
‘Cause you have the right to say it and not get strung up in public
[Video version: “Cause you have the right to hate it and not get stoned to death public”]
As children we were taught how to walk and talk
But the system wants adults to sit down and shut up
Cancel culture runs the world now, the planet went crazy
Label everything we say as homophobic or racist
If you’re white then you’re privileged, guilty by association
All our childhood heroes got MeToo’d or they’re rapists
They never freed the slaves
They realized that they don’t need to change
They gave us tiny screens, we think we free ’cause we can’t see the cage
They knew that race war would be the game they’d need to play
For people to pick teams, they use the media to feed the flameThey so fake woke, facts don’t care about feelings
They know they won’t tell me what to believe in
They so fake woke, same old, safe zones
They so fake woke, facts don’t care about your feelings

I think it’s crazy how these people screaming “facts” but they fake woke
Hate their neighbor ’cause he wears a mask or he stays home
Has a daughter but his favorite artist said he slays hoes
Picks her up from school, music slaps on the way home
Censorship’s an issue ’cause they choose what they erase
There’s a difference between hate speech and speech that you hate
I think Black Lives Matter was the stupidest name
When the system’s screwing everyone exactly the same
I just wanna spend Thanksgiving Day with food and my family
Without being accused of celebrating native casualties
We got so divided as black and white and political
Republicans are bigots, libtards if you’re liberal
There’s riots in our streets and it’s just getting worse
Y’all screaming defund the police, y’all are genius for sure
They’re underfunded already, they’re way too busy to work
Order food and call the cops, see what reaches you first
Segregation ended, that’s a lie in itself
That was a strategy to make us think that we’re trying to help
They knew that racism was hot if they designed it to sell
We buy up every single box and divide us ourselves

Use violence to get peace and wonder why it isn’t working
That’s like sleeping with a football team to try and be a virgin
Politicians are for sale and someone always makes the purchase
But you and I cannot afford it, our democracy is worthless
If a man has mental illness call him crazy, say it silently
When countries going crazy we accept it as society
Get sick and take a pill when the side effects get you high
You get addicted like these rappers dying fighting with sobriety
Censoring the facts turns our children into idiots
They claim it’s for our safety, I’ll tell you what it really is
Removing information that empowers all the citizens
The truth doesn’t damage points of view that are legitimate
They’re tryna amen to a-men-and-women
How’d we let them make praying a microaggression?
Instead of asking God for the strength to keep winning
We cheat to get ahead and then we ask ’em for forgiveness

Feminism used to be the most righteous of fights
But these days it feels like they secretly hate guys
I don’t trust anyone who bleeds for a week and don’t die
I’m just kidding, but everything else that I said is right