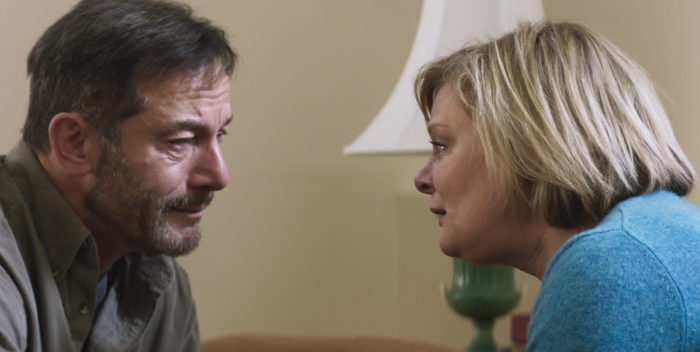 Wanna see some acting? Like some real acting? Then you’ll have sit through the uncomfortable but searing “Mass,” written and directed by Fran Kranz.

Guess who he is? He’s the son-in-law of “Charlie’s Angels” star Jacklyn Smith. I met him a few years ago when he acted in “You Can’t Take it With You” on Broadway and stole the show. Ditto “Death of a Salesman.” Nice guy, very talented. I wondered what happened to him.

This is what happened: he’s written and directed a play for a quartet of actors that will find its way to Broadway after the movies and make a fortune. It’s easy to produce, and it’s important. And moving.

The “mass” here is a mass school shooting, and it seems that two couples must meet to discuss the aftermath of in which 10 children were killed. And the shooter, one of their fellow students. Ann Dowd and Reed Birney are parents of the shooter. Martha Plimpton and Jason Isaacs’s son was killed in the shooting. The latter couple wants no money. They want an explanation. What happened? Why did Hayden lose his mind and go on this shooting spree? What was the turning point in his life? They want their son, Evan, back. Unfortunately, Hayden’s parents have plenty of explanations and none. They tried to do everything right.

When the movie starts, it’s like a play that’s been opened to make a film. There’s a long preamble in which we arrive at an Episcopalian church that’s been chosen for this meeting. Only, we don’t know what the meeting will be, and don’t know for some time even after we meet the two couples. It’s all very Beckett or Ionesco, very existential. What’s happening? What is is that’s bringing this foursome to a table in a church office?

You know, we’re never going to get a satisfactory ending. Two young boys are dead. One killed the other, but it wasn’t “personal.” He was just shooting everyone. Yet it is personal to Evan’s parents. We’re deadlocked from the beginning. But Kranz’s script is unusually rich in the plumbing of this mathematical problem. And the actors are literally on fire. Ann Dowd will just break your heart. She and Isaacs, in opposite couples, are emotional wrecks. Birney and Plimpton are maybe more methodical, but they are equally devastated and devastating. The casting directors really deserve awards for assembling this foursome. They give a masterclass from which everyone could learn something.