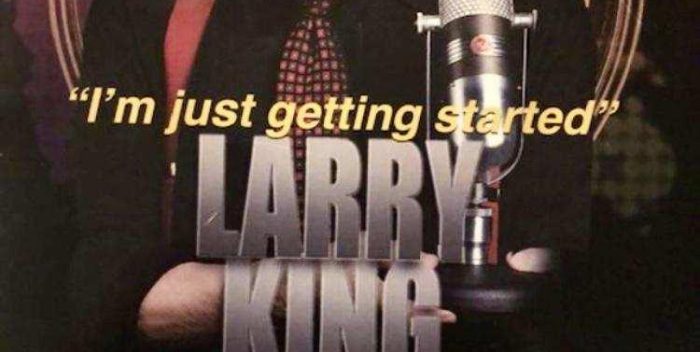 UPDATE As I reported, Larry did leave the hospital on Tuesday and was home briefly. But I’ve confirmed that he was rushed back to Cedars Sinai “very soon after.” At least once home he was able to say goodbye to his family and vice versa.

SATURDAY 8AM Overnight, Larry King has died at Cedars Sinai Hospital in Los Angeles from COVID. He never made it out even though on Monday I reported he was supposed to leave the hospital. It’s unclear if he did return home. Details are forthcoming.

Larry was still officially married to his wife of 23 years, Shawn Southwick, although they’d negotiated a divorce. He’s survived by Shawn, and sons Larry J., Cannon, and Chance. Larry was married 8 times to 7 women. Last fall, two of his adult children, Andy and Chaia, each died of cancer. They were full brother and sister through their mother, who Larry married twice. He adopted Andy.

On CNN and Mutual Radio, Larry was a King for decades. His nightly shows were must-listen or watch. But in 2010, CNN decided that they were done with him, and Larry joined forces with Mexican billionaire Carlos Slim and something called ORA TV. He and Southwick started a business with Slim that reaped them millions thanks to infomercials that were shown all over cable TV. It wasn’t like the old days– no celebrities– but Larry made a fortune anyway.

Larry’s influence can’t be underestimated. My favorite Larry King story, which I wrote for New York Magazine in December 1994, was seeing him come out of Judge Ito’s chambers at the OJ Simpson trial pre-trial hearing in Los Angeles. Everyone was seated in the courtroom, including OJ, we were waiting for Ito. Suddenly the doors open and Larry, his daughter Chaia, and the judge all emerge. Larry shakes the judge’s hand, then goes and shakes hands with OJ and his lawyers. It was surreal.

So much more about Larry to say later on this morning. Rest in peace, sir. You did it all your way.