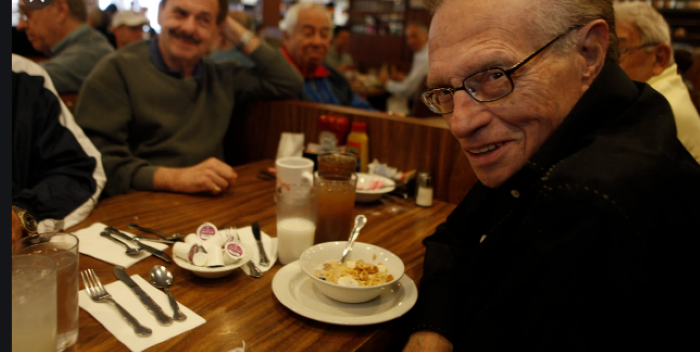 Good news for a change. After nearly a month in the hospital, I’m told that Larry King will get sprung tomorrow and go home.

Larry, 87, has been battling COVID-19 since at least December 20th in Cedars Sinai Hospital, Los Angeles. He was briefly in the ICU until Cedars ran out of room there for critical patients.

The broadcast legend has a lot of underlying conditions: He had a heart attack in 1987 and open heart surgery. In 2019, he had stents put in to clear blockages. In 2020, he had a stroke that nearly killed him. He also deals with Diabetes 2.

You could say Larry’s had seven wives and nine Lives. His current wife (he had eight marriages, two to the same woman), Shawn Southwick, is divorcing him, maybe. So far, she’s been very involved in his recovery. Larry and Shawn have two sons, Chance and Cannon. Larry has another living son, Larry Jr. His two other adult children, Chaia and Andy, died last year tragically within a short time of each other, from cancer.

That Larry is going home is a miracle, a real good news story. He’ll have to lay off the chopped herring for a while, on those deliveries from Nate n Al’s in Beverly Hills. Larry, stick with the matzoh ball soup! And no pastrami, no matter how lean!