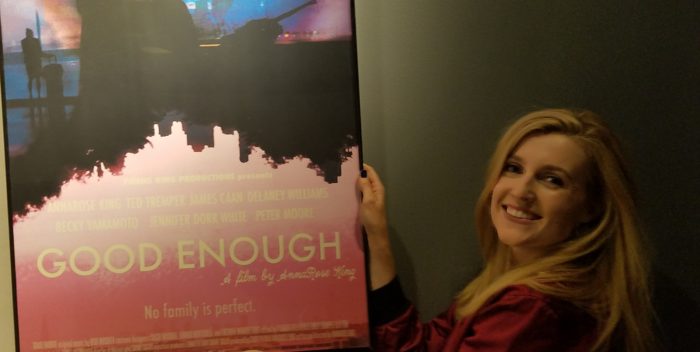 Three years ago this past October I was invited to a small private screening for a movie called “Good Enough,” directed by Anna Rose King. She was the daughter of Roger King, the late syndication titan who put Oprah on the map. I thought, this has to be terrible but I’ll go, it’s near my house.

“Good Enough” was wonderful, as it turned out, and so was Anna Rose King. Not cashing in on her father, she was a self-starter with lots of great ideas. And she was just lovely– funny, open, articulate. Smart. Beautiful. I thought, she could be s a star. Anna Rose made a very good movie, one that I thought should have been at Sundance and released properly. We spent the evening talking about all this, and then, life went on.

Tonight I’ve learned that Anna Rose, 35, has died of lung cancer. What??? She was married and had a 4 year old daughter.

I did lose track of her but often wondered what had happened after that screening. She must have been diagnosed not long after that night. She had a few other directing credits, and last year she was selected as a 2020 Sundance Institute FilmTwo Fellow for her screenplay about a New York woman who seeks to cure her cancer by participating in an experimental treatment in Houston.

This is heartbreaking for her family and friends, and her admirers, of which I count myself as one. What a shame. So far, 2021 isn’t much better than 2020.

Read my original piece here. I took this photo, we set it up after the screening.

PS I don’t know if “Good Enough” is on iTunes, but if it is, take a look. You won’t be disappointed.