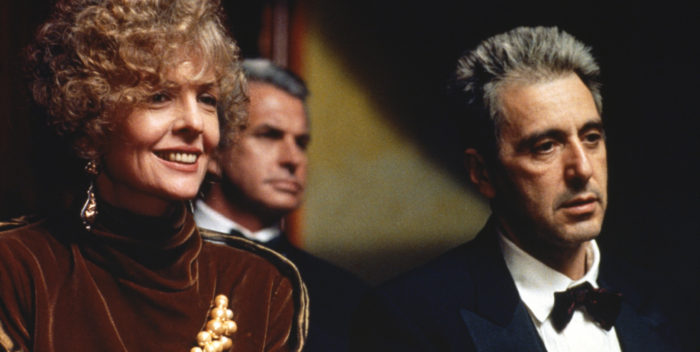 I think about Francis Ford Coppola a lot. He’s our Orson Welles, isn’t he? He made these two masterpieces, the first and second “Godfather” movies. They’re like the Beatles of the movies. Then he made “Apocalypse Now.” Genius again. The rest of his resume is good and bad, with highlights and disappointments, and it doesn’t matter. (I really liked “Peggy Sue Got Married,” actually.) His work is done.

Why he made “The Godfather III” in 1989, released in 1990, remains a sticking point. Why not just leave perfection alone? But I guess the money was too good, and he had most of the actors, so why not? The movie was met with derision. The biggest problem was his daughter, Sofia, who replaced Winona Ryder at the last minute playing Michael Corleone’s daughter, Mary. She had no acting experience and retained an 80s Valley Girl stance. She was reamed in reviews. No one could have guessed that Sofia would go on to become a talented and important film director in her own right.

“The Godfather III” was also very convoluted. What was it about? It was like taking Hamlet and adding another act to his story. When we left Michael Corleone, he’d had his brother, Fredo, killed for betraying him, Kay, his wife, had left with their children. His brother, Sonny, and father, Don Corleone, were dead. He’d taken the family to Vegas, bought casinos, and wound up alone. It was a chilling end to a tragedy. So now what?

For “Coda: The Death of Michael Corleone,” Coppola gets a rare second chance to fix his own mistakes. He digs 40 minutes into the original film and pulls out a plot-defining moment between Michael (Al Pacino) and Archbishop Gilday. the priest in charge of Vatican funds, at St. Patrick’s Cathedal (the amazing Donal Donnelly). Now the new version begins with Michael proposing basically that the Corleone’s divest from Vegas and buy the Vatican’s debt. So we at least know what the movie is about.

From then on, Coppola shortens the movie by about 20 minutes by cutting away his old, former opening  that ponderously recapped Fredo’s death and included a ceremony at which Michael gets a big award. Instead. we go straight from St. Patrick’s to Michael inviting his estranged grown kids to a family party celebrating the Vito Corleone Foundation. Whew! The party, which arrived later in the original film, reflects the original film’s wedding. Various people come to Michael for favors. There’s an intimation of trouble brewing with the other mob families, and we launch ever more quickly into “Coda.”

The good news is that Sofia Coppola, with the long knives no longer out for her, is fine. She’s not a great actress, but she makes Mary convincingly vulnerable. The central plot turn in both films remains Mary’s incestuous relationship with Vincent, the bastard son of Sonny and the girl he knocked up at his own wedding, Lucy Mancini. (Page 27 in the hardcover, I was 13.) It’s still very creepy, this relationship. But Andy Garcia is outstanding as Vincent. I think he would have had a bigger career if not for the way “The Godfather III” was received.

Now that the plot has been resolved, you can sort of calm down and enjoy other aspects of the film. Al Pacino is just stunning. I don’t know what Coppola’s other cuts were (it doesn’t seem like many) but Pacino, to me, is mesmerizing. He carries the film, of course, and he’s magnetic. In the film, it’s been 18 years since he left Michael Corleone to grieve, and he knows the character is dying (diabetes, other medical issues). He’s trying to save his family and prepare them for the future. But their time is over. The romance of the mob is becoming a legend, not a sustainable plan. And of course, the film still gives Pacino one of his great movie lines in history: “Just when I thought I was out, they pull me back in!”

Some things remain bewilderments. Bridget Fonda was miscast as Vincent’s one night stand. Fonda stands out like a sore thumb because you think, she’s a star, she’ll turn up later. She just disappears. But mostly there are just some real gems here: Talia Shire, Eli Wallach, Joe Mantegna, and George Hamilton are all rather terrific in their supporting roles. (Wallach is really sensational.) Diane Keaton, I love her, but she’s dressed and coiffed like Annie Hall, not Kay Corleone. Keaton the actress comes through, though: her look of anguish and grief in the movie’s big climax is incendiary. Look at her eyes. They are wild with the horror of what her participation in this family has cost.

“Coda” is supposedly playing in theaters somewhere beginning December 4th. If it’s not at the Ziegfeld, I don’t care. Blu Ray, DVD. and streaming commence December 8th. If you’re a Godfather fan– and who isn’t?–you must return once more to the scene of the crime.